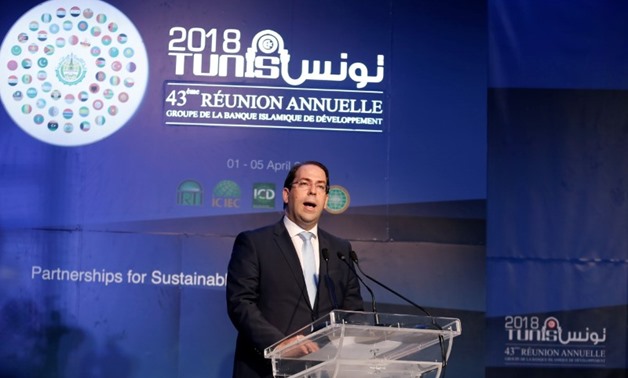 TUNIS - 25 July 2018: Tunisian Prime Minister Youssef Chahed said on Tuesday a change of government would put the economy at risk and shake the confidence of international lenders, rejecting the president's call for him to stand down amid an economic crisis. President Beji Caid Essebsi this month urged Chahed to step down if the country's political and economic problems persisted. Since the toppling of autocrat Zine al-Abidine Ben Ali in 2011, nine cabinets have failed to resolve high inflation and unemployment. Turmoil and militant attacks have deterred tourists and investors, eroding living standards.

Impatience is rising among lenders such as the International Monetary Fund, which have kept the North African country afloat.

But Chahed said the economy was about to turn a corner.

"A change of government will shake the confidence of Tunisia's international partners ... as economic data will begin to improve by the end of this year," he told state news agency TAP, in his first response to calls to step down.

Chahed has also had to tackle the problem of trafficking of migrants. Human traffickers have increasingly moved their operations to Tunisia since a crackdown by the coastguard in neighbouring Libya.

Last month he fired Interior Minister Lotfi Brahem after dozens of migrants died when their boat bound for Italy sunk after setting off from a southern island without being intercepted by security forces.

On Tuesday Chahed appointed Hichem Fourati, a senior official in the interior ministry, as Brahem's replacement, a government statement said.

In the TAP interview, the prime minister said the government planned to reduce its budget deficit next year to 3.9 percent from 4.9 percent this year, with expectations that public finances would be boosted by improved tourism revenues.

President Essebsi's son, Hafedh Caid Essebsi, who is leader of the ruling Nidaa Tounes party, called in May for Chahed's dismissal over his handling of the economy.

His call was supported by the powerful UGTT union, which rejected economic reforms proposed by the prime minister.

The moderate Islamist party Ennahda has said the exit of the prime minister would hit stability at a time when the country needed economic reforms.