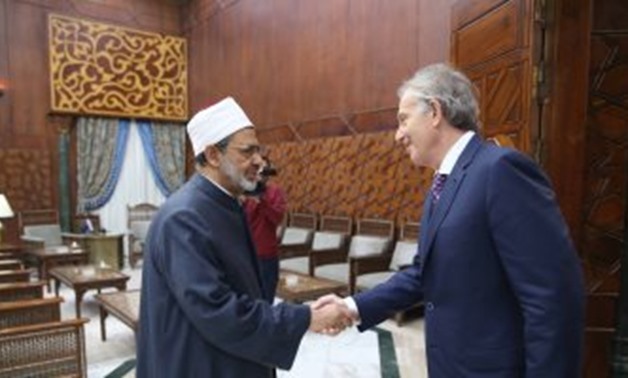 CAIRO – 18 July 2018: Egypt’s Grand Imam of Al-Azhar, Ahmed el-Tayyeb, met with former Prime Minister of Britain, Tony Blair, on Wednesday at his residence in London to enhance cooperation between Al-Azhar and Britain.

The Grand Imam aspired that the meeting would be an additional step to support the values of peace, dialogue and coexistence, pointing out that the two sides share a common point of view regarding combating terrorism and countering extremist ideas.

Tayyeb added that Al-Azhar receives hundreds of imams from around the world every year to train them to confront extremism and provide them with proper religious education.

For his side, Blair expressed his happiness to meet the grand imam, adding that Tayyeb is considered an important figure for people around the world and that his message conveys the true image of Islam.

During the meeting, Blair stressed that Al-Azhar plays a vital role in combating terrorism; he also referred to Al-Azhar Observatory to Combat Extremism which includes about 100 researchers working in 12 different languages to compile and analyze information to combat terrorism.

Tayyeb also met members of the British Christian-Muslim Forum at his residence in London, Lambeth Palace, in the presence of Dr Justin Welby, the Archbishop of Canterbury.

The Grand Imam said during a meeting that we should enhance the dialogue between religions and cultures by involving youth and making use of their capabilities to promote the values of peace and coexistence in societies, the Egyptian Gazette Reported.

Grand Imam Tayyeb arrived in Britain on July 12 to participate in the Youth Forum for Peacemakers organized by Al-Azhar, in cooperation with the Council of Muslim Sages and the British Canterbury Diocese.