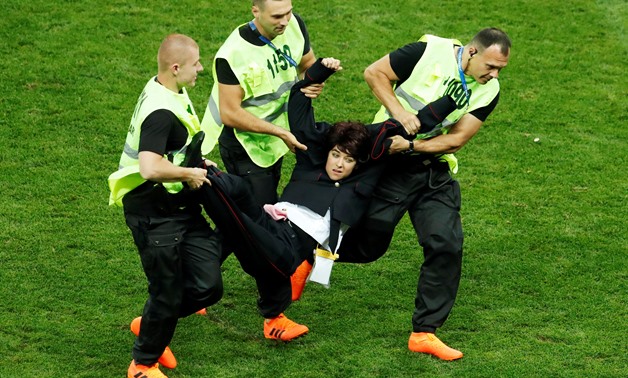 CAIRO – 15 July 2018: The World Cup final between France and Croatia on Sunday was briefly interrupted when three intruders affiliated to anti-Kremlin punk band Pussy Riot ran onto the pitch before being hauled off by stewards.

In a post on its Facebook page, the group said its action was intended to draw attention to what it said were human rights abuses in Russia.

In the second half of Sunday's match, the three people wearing white shirts with police-style epaulettes, black trousers and police hats ran out onto the pitch from the area behind the French goal. A fourth person tried to run onto the pitch but was tackled on the sidelines.

The three ran about 50 metres, dispersing in different directions, before stewards wearing high-visibility jackets tackled them to the ground and dragged them off the pitch.

One photograph on social media showed one of the pitch invaders, a woman with blonde hair tucked under a police cap, performing a high-five with France player Kylian Mbappe before being caught.

The match, watched from the stands by Putin and the French and Croatian presidents, was halted, but resumed about 25 seconds later. A witness at the stadium said he had seen police escorting the pitch invaders out of the stadium grounds.

Pussy Riot member Olga Kurachyova told Reuters she was one of the pitch invaders and was being held at Luzhniki police station. She said she could not speak further because police were trying to take her mobile phone away from her.

Moscow police said in a statement that three young women and a young man had been detained after running onto the pitch.

In its Facebook post, Pussy Riot complained of rights abuses in Russia. They alluded to Oleg Sentsov, a Ukrainian filmmaker jailed for 20 years in 2015 for setting fire to two offices in Crimea, including one belonging to Russia's ruling party, after Moscow annexed the region from Ukraine.

The group shared a video on social media recorded before the incident featuring three female activists, at least two of whom were among those detained. They wore police uniforms and one of them wore a pink balaclava.

"The World Cup has shown wonderfully what the police can be like in Russia, but what will happen afterwards?" one of the activists asked in the video, an apparent allusion to lenient policing noted by Russians during the tournament.

A separate video posted on social media appeared to show the moments after the pitch invaders had been detained.

Two of them, a man and a woman, could be seen standing in a room, dressed in dishevelled police uniforms, while a voice off camera demanded handcuffs be brought.

"Do you know that Russia will pay for this to FIFA through sanctions?" the off-camera voice said, in an angry tone. "You wanted to shit on Russia, didn’t you?"

"We are for Russia," the male detainee replied.

"Sometimes I regret that it's not 1937," the person off- camera in the video said. That year was the height of political repressions carried out by Soviet dictator Josef Stalin.

Photographs of the pitch invasion suggested the pitch invaders did not include the three Pussy Riot members who were jailed in 2012 for performing in the church.

Russian news website MediaZona, co-founded by one of the original three Pussy Riot members, Nadezhda Tolokonnikova, reported that one of the pitch invaders was Pyotr Verzilov, Tolokonnikova's husband.