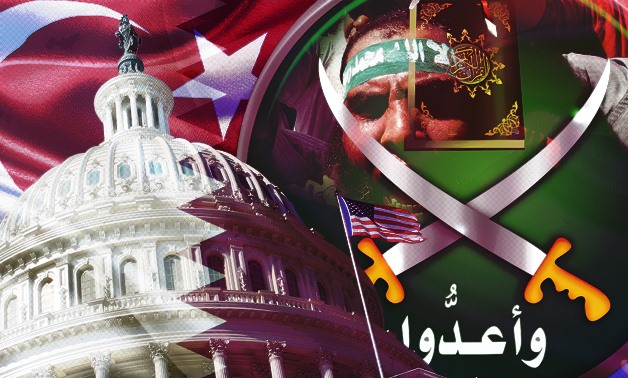 The subcommittee described the brotherhood as a “radical Islamist organization that has generated a network of affiliates in over 70 countries.” – Photo compiled by Egypt Today/Mohamed Zain

CAIRO – 12 July 2018: Lawmakers at the House of Congress’ Subcommittee on National Security gathered for a hearing on Wednesday “to examine the threat of Muslim Brotherhood to the United States and its interests and how to effectively counter it.”


According to Free Beacon, “The hearing is expected to set the stage for Congress to follow through on efforts that begun in 2015 to convince the Obama administration to designate the Muslim Brotherhood as a terror group following its violent, and eventually failed, takeover in Egypt.”

On Nov. 3, 2015 Congress lawmakers filed a legislation to formally designate the Muslim Brotherhood a “sanctioned terrorist organization”, outlining the brotherhood’s long history of terror and bloodshed.

The following is the bill, obtained by the Washington Free Beacon:

"We have to stop pretending that the Brotherhood are not responsible for the terrorism they advocate and finance," Sen. Ted Cruz told the Free Beacon in an interview.

“Since the Obama administration refuses to utter the words ‘radical Islamic terrorism,’ and Congress owes it to the American people to tell them the truth about this threat."

At the time, five countries, namely Egypt, the UAE, Saudi Arabia, Syria and Russia, had already designated the Muslim Brotherhood a terrorist organization.

According to Rep. Ron DeSantis, the National Security Subcommittee's chair, U.S. policy has failed to address the Brotherhood's radical behavior and support for terror groups.

Countries such as Turkey and Qatar have been working and growing relations with the Muslim Brotherhood, sparking concern among lawmakers such as DeSantis.

Lawmakers at the hearing also kept a close eye on exposing the roles that both Qatar and Turkey play in bolstering the group's radical ideology.

A senior Fellow at the Hudson Institute and director of its Center on Islam, Democracy and the Future of the Muslim World, Hillel Fradkin, stated on his testimony that “The Brotherhood certainly means to be global and it means to be a threat."

More specifically the Muslim Brotherhood is devoted to a political and religious project that in principle, in its essential character and goals, is hostile to other forms of politics, including our own. And it means for this project to be global in extent.”

He dded that the Brotherhood is for the present a broken organization in Egypt, but it has sustained defeats before, partially by finding bases elsewhere and this meant Saudi Arabia in the 1960’s and today it means Turkey and Qatar.

Previous efforts to designate the Muslim Brotherhood a terrorist organization have failed during the Obama administration due to its explicit policy of making diplomatic overtures to the group.

M. Zuhdi Jasser, president of the American Islamic Forum for Democracy, said in his testimony, “With Qatar for example, it has become the Arab national safe haven for former Egyptian Muslim Brotherhood luminaries and activists. They have provided them not only safe haven but a global perch from which to spread their ideology and hegemony,”

“Their media arm, Al Jazeera, is reportedly staffed by upwards of 90 percent MB sympathizers. Their position on the MB has placed them squarely in the crosshairs of Saudi Arabia, the United Arab Emirates and Egypt,” he added. “It is not surprising that along with Qatar’s relationship with the Brotherhood it is also very sympathetic politically ideologically and economically with Iran and its Khomeinists. This schism within the Sunni region led to an embargo last year on Qatar that remains until Saudi demands are met with abandonment of the Muslim brotherhood being primary.”

Moreover, he said the Emir of Qatar has been historically close to Sheikh Yusuf al-Qaradawi who has been there since 1961. Qatar has been all in with the belief that the brotherhood represented the wave politically of the future in the Middle East.

“They similarly have supported Hamas and the Iranian global sponsorship of terror turning a blind eye to their support of Hezbollah and the Assad regime. They share rich natural gas fields with the Iranian regime. The Brotherhood’s desire to create a global Sunni caliphate and Islamic state positioned the Qatari royal family to be part of that leadership.”

As for Turkey, he added in his statement that “Turkey, along with Qatar, proceeded to aid and support the radical Islamist element of the Syrian Muslim Brotherhood and marginalize the more liberal secular elements of the revolution.”

It also helped them counter their Kurdish enemies. Qatar did the same. Nothing epitomizes the relationship between Erdogan’s AKP and the global Muslim Brotherhood then the recent hosting by the Republic of Turkey of the 90th anniversary gala of the Muslim brotherhood.”

“Speeches and rhetoric from the event and releases around the event in Turkey noted the Brotherhood’s call to continue on the path of a comprehensive restoration of Islamic states.”

“The other global platform for the Muslim brotherhood is growing with the country of Turkey which also has an Islamist party in control--the Islamist Justice and Development Party (AKP) of Recip Erdogan. Turkey is a separate case study requiring a hearing on its own; however, its decades-old support of Hamas, it’s aid to help Iran subvert the sanctions against them, and its own evangelical Dawa into the West including now the largest mosque in the United States built in Maryland by the Turkish Republic’s diyanet religious authority are all consistent with and in parallel to the project of the Muslim Brotherhood.” Jasser’s testimony added.