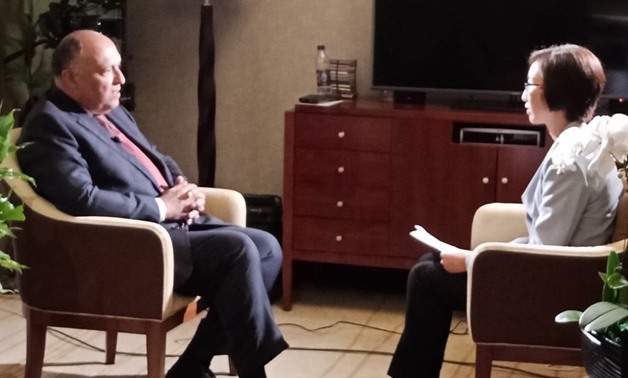 CAIRO – 10 July 2018: "Qatar has harmed the Arab region and contributed to the killing of dozens of innocent people by sponsoring and supporting terrorist organizations and extremists and harboring terrorist figures who appear on satellite channels located on its territory," said Egypt's Foreign Minister Sameh Shoukry on Tuesday.

In an interview with Chinese Arabic-speaking satellite channel CGTN, Shoukry stressed the four Arab countries, which had cut ties with the oil-rich state of Qatar, insist on their stance towards Doha as long as it persists to adopt the same approach.

"If Qatar stops funding terrorism, attempting to destabilize its neighbors and interfering into other countries' domestic affairs, the Arab Quartet will reconsider the boycott," Shoukry noted.

He added that the Qatari refusal to the Arab Quartet's demands would lead to continuing the boycott to contain the Qatari policies' harms.

Qatar has prepared a "malicious plot" to destabilize the security and order in Cairo through terrorist elements existing in Libya, according to Libyan Parliamentarian Abu Bakr Moustafa Bouaira.

QatariLeaks website revealed that Turkey and Qatar contributed in an anti-Egypt plot. Bouaira stressed that Ankara and Doha played key roles in empowering terrorist groups in Libya to rule the country and spread chaos after the liberation of Derna and the oil crescent, according to the QatariLeaks website.

Egypt, Saudi Arabia, the UAE and Bahrain announced they are severing relations with Qatar over "its continuous support for terrorism," closing their airspace and seaports to Qatari transportation in June 2017. The Arab Quartet issued 13 demands to Doha – then shortened to six principles – including closing Al-Jazeera television channel, which the quartet says promotes extremism and publishes false news.

In May 2017, the Egyptian authorities decided to ban 21 news websites, including HuffPost Arabi and Qatari-based Al-Jazeera, for "supporting terrorism and publishing fake news."

In May 2018, Qatar said it was banning products originating from the quartet countries. “To protect the safety of consumers in the State of Qatar and to combat improper trafficking of goods, the government issued a directive to find new suppliers of the variety of goods impacted,” the Qatari government said in a statement.