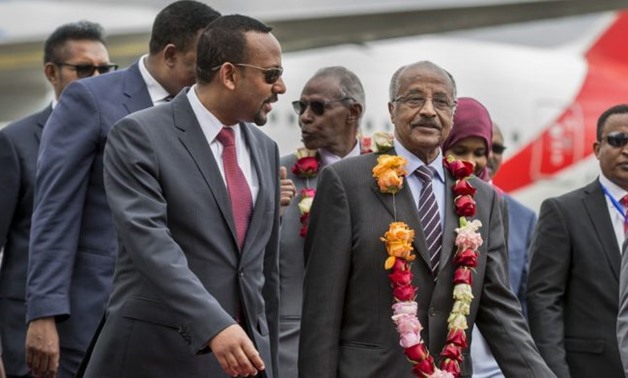 CAIRO – 9 July 2018: Egyptian Foreign Ministry announced Monday welcoming the “joint declaration of peace and friendship” signed by the leaders of Ethiopia and Eritrea to normalize ties and end 20 years of conflict.

In a statement, the Foreign Ministry praised the “historic visit” of the Ethiopian Prime Minister Abiy Ahmed to Eritrea’s capital of Asmara, affirming that the outcome of this visit will certainly contribute to turn the page and start a new era between the two countries.


The meeting will also help achieve security and stability in the region, and will satisfy the aspirations of the peoples of both countries in peace and development after long years of dispute and instability, the ministry said. It also expressed hope that similar deals are replicated across Africa.

The ministry also expressed Egypt’s keenness to strengthen cooperation with both countries and other African nations to enhance stability, achieve development and eliminate poverty. The statement also praised the efforts made by the political leadership of the two countries which led to the success of the deal.

The leaders of Ethiopia and Eritrea signed a "joint declaration of peace and friendship" on Monday, Eritrea’s Minister of Information Yemane G. Meskel said. The declaration was signed a day after a historic summit marked a start to the normalization of ties between the longtime foes.

"The agreement, which consists of five pillars, was signed this morning at State House by Eritrean President Isaias Afwerki, and Ehiopia’s Ahmed," Eritrea’s Minister of Information Meskel Tweeted.

Ethiopia's state-owned airlines will subsequently resume flights to Eritrea's capital, Asmara, next week, a state-affiliated news agency reported on Monday, hours after the neighbors and longtime foes declared the end of their "state of war".

The nations went to war and cut ties in 1998, but last month, Ahmed offered an olive branch to Eritrea, kicking off a rapid rapprochement that has stunned the region and delighted many citizens in both states.

Ethiopia and Eritrea have also agreed to re-open embassies in each other's capitals, Ahmed said on Sunday after a day of talks with Eritrea's President Afwerki, The New York Times reported.


The two nations were engaged in a war that took place between 1998 and 2000 over the border town of Badme. The war resulted in tens of thousands of casualties. Although a peace deal has been signed by both countries in 2002, none of them complied with it.

However, Ethiopia's new reformist prime minister promised earlier in June to comply with the outcome of the 2002 deal, which grants Eritrea the town of Badme and other disputed territories.