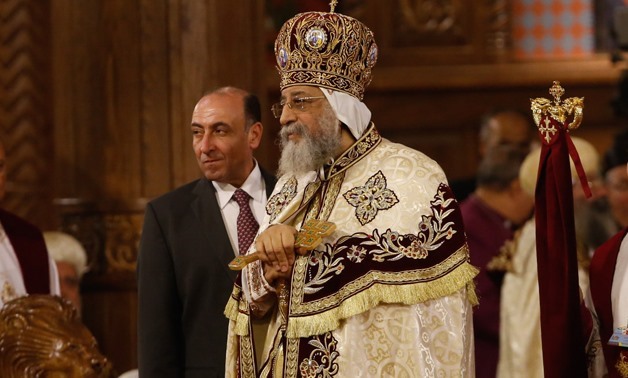 CAIRO – 19 June 2018: “Christianity is rooted in Egypt and there are many Coptic monuments (across the country), including the Coptic monasteries,” Pope Twadros II said during a reception at the Cathedral in Abbasiya for the Italian tourist delegation currently visiting Egypt.

The second Italian tourist delegation arrived in Cairo on Sunday to embark on a tour of the path of the Holy Family in Egypt, according to officials at the Cairo International Airport.

The pope welcomed the delegation, stressing that Pope Fracis' visit to Egypt in 2017 was a blessing to the country. "Four years ago, I visited the Vatican; we have good relations and we sustain continuous communication," the pope pointed out, adding that he will meet Pope Francis in a few weeks.

This delegation’s visit comes in light of the pilot program for a dramatic reenactment of the journey made by the Holy Family in Egypt.

The Holy Family came from Palestine to Egypt via the Arish road and arrived in Old Egypt; then they moved to Upper Egypt. They hid there for a while and then returned to the north, passing through the Natroun Valley, and then continuing through Sinai to Palestine.

Pope Francis visited Egypt in April 2017, held a mass and acknowledged the Holy Family’s journey in Egypt as an official Christian pilgrimage. This announcement puts the Holy Family tour on equal footing to Fatima in Portugal, suggesting that thousands of Christian tourists would visit Egypt.