Iraqi migrant suspected in rape and murder of German girl 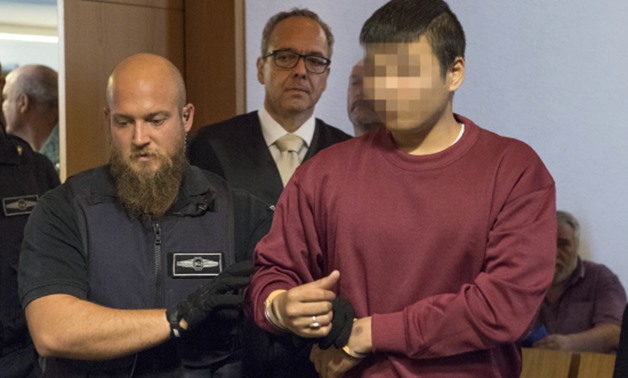 Husseen K. (R), who is accused of raping and killing a young woman in October 2016, and his lawyer Sebastian Glathe (C) enter the court room at the regional court in Freiburg, southern Germany, on Sept 5, 2017. — AFP

WIESBADEN, Germany - 8 June 2018: German officials on Thursday said an Iraqi man suspected of raping and killing a 14-year-old girl had likely fled the country and returned to Iraq.

The case has deeply upset Germans and has led to calls from politicians for an overhaul to rules on asylum to make it easier to deport immigrants thought to be violent.

The victim, Susanna Feldman, was Jewish, although police said there was no evidence her religion was a factor in the crime, and the Central Council of Jews in Germany cautioned against attributing any anti-Semitic motive to her attacker.

The suspected involvement of an asylum seeker could add to a backlash against Chancellor Angela Merkel's decision to open the door to more than a million migrants in 2015.

The teenager, from the city of Mainz near Frankfurt, was reported missing on May 22. She was found dead on Wednesday in a wooded area near train tracks in Wiesbaden on the opposite bank of the Rhine, near a refugee center where the suspected attacker lived, according to police. An autopsy showed she had been the victim of a sexual and violent attack.

Police said they were looking for 20-year-old Ali Bashar, who they believe fled to Erbil, Iraq, with his family days ago. They said they had set up a special call center for tips from the public, and issued releases in Arabic and Turkish.

The girl was last seen alive at the refugee center, broadcaster ARD reported. ARD said Bashar was known to police because he had become violent with officials over his asylum status, and had previously been suspected in the rape of an 11-year-old girl at the refugee home, although an investigation was inconclusive.

A second man, a 35-year-old Turkish citizen who was not identified, was detained on Thursday but released after new evidence emerged that exonerated him, police said.

Politicians from across the political spectrum called for a comprehensive investigation, including into how it was possible for the Iraqi man to flee Germany with his parents and siblings under what police said were false names.

Eckhardt Rehberg, a conservative member of parliament, said funds were needed to reform the entire asylum process. "The deportation possibilities must be simplified now," he said.

Although police were careful to say there was no evidence of any anti-Semitic motive, memories of the Nazi Holocaust make violence against Jewish victims in Germany especially sensitive.

The Central Council of Jews in Germany said: "Many of the details of the case are still unclear. We expect a rapid and comprehensive investigation from the prosecutorial authorities, and hard consequences for the perpetrator or perpetrators."

The Council has warned in recent months about an increase in anti-Semitic incidents, and the German government has created a new post to fight anti-Semitism.

Some German Jews have expressed concern about a perceived rise in anti-Jewish prejudice with the influx of mainly Muslim migrants, although German police blame most anti-Semitic incidents on followers of the German far-right.