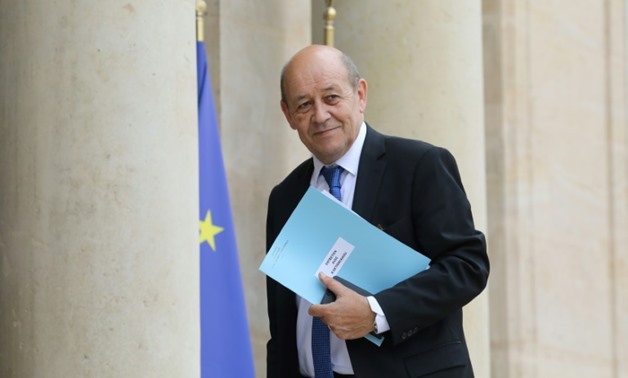 7 June 2018: French Foreign Minister Jean-Yves Le Drian warned Iran on Wednesday that its plan to increase its uranium enrichment capacity took it close to a "red line", as Europe sought to protect its companies from a nuclear standoff between the US and Tehran.

Iran confirmed Wednesday that it was in "preparatory works" to restart nuclear activities in the event that a 2015 accord with world powers on limiting its atomic programme falls apart.

In such a scenario, Iran could "restart its activities without any limits," Iran's ambassador to the International Atomic Energy Agency Reza Najafi told reporters on the sidelines of a meeting of the IAEA's board in Vienna.

The announcement piled pressure on France, Britain and Germany, who are scrambling to save the deal after the US sensationally pulled out a month ago.

"It is always dangerous to flirt with red lines," he said, while emphasising that these plans did not constitute a breach of the accord.

The deal, which offers sanctions relief in return for guarantees that Tehran would not be able to build an atomic bomb, is hanging by a thread after the US announced plans to restore sanctions, diminishing the incentive for Iran to remain on board.

Tehran has put the ball in Europe's camp, demanding it come up with an economic package to offset the effects of the US withdrawal.

"The bottom line is that unless Tehran sees some benefits, it is unsustainable to continue limiting its nuclear programme, which is civilian in their eyes," Ellie Geranmayeh, Iran analyst for the European Council on Foreign Relations in London, told AFP.

"In practice it will revert back to the sanctions years when it had no restrictions."

Le Drian warned Tehran that Europe would not be able to stand idly by if Iran takes its nuclear programme "to the next level".

"The Iranians must realise that if they violate the accord they will face new sanctions," he told Europe 1 radio.

A spokesman for the German foreign ministry also described the plan as "not helpful at this time" saying it did not "contribute to the building of trust, in which Iran should also have an interest."

Apart from the risk of a nuclear-armed Iran, Paris, Berlin and London also fear the fallout of the showdown for European companies which invested in the country since 2015.

The US has threatened them with reprisals if they remain in Iran after it re-imposes sanctions on the country.

France, Britain, Germany and the EU on Wednesday sent the US a joint official request "to exempt European businesses doing legitimate trade in Iran from all extraterritorial American sanctions".

In the letter to US Treasury Secretary Steven Mnuchin and Secretary of State Mike Pompeo they warned that "secondary sanctions" by the US on European companies could jeopardise Europe's ability to uphold its end of the deal.

Several multinationals, including French oil giant Total and Danish shipping group Maersk, have already announced they will pull out of Iran once the sanctions are fully reimposed, unless they receive explicit exemptions from Washington.

French automaker PSA also said it would pull out of two joint ventures to sell its cars in Iran to avoid the risk of punishing US fines.

The European Commission said Wednesday it had updated a rarely-tested legal mechanism intended to provide legal cover to European companies in the face of US sanctions.

Officials acknowledged however that the mechanism known as the blocking statute may prove ineffective, especially for multinationals with a significant presence in the US.

Analysts point to the $9-billion fine handed to French bank BNP Paribas in the US in 2015 for sanctions-busting in Sudan, Cuba and Iran as an example of what could await European companies.