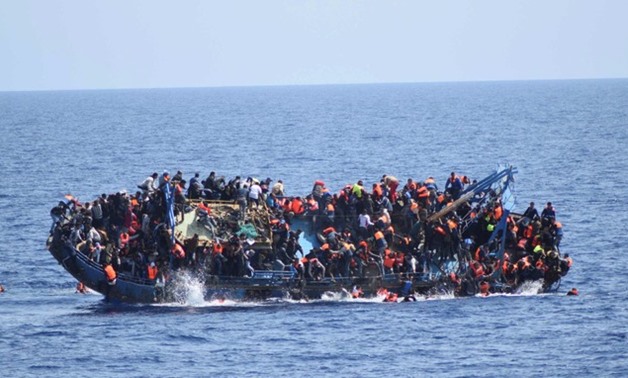 FILE- Overcrowded boat capsized off the coast of Libya in May, 2016 - Reuters

CAIRO – 4 June 2018: The government has not spotted citizens illegally fleeing the country by sea since 2016, due to the coast guarding strategy, thanking the Interior Ministry for arresting smugglers, Youth and Sports Minister Khaled Abdel Aziz, said Monday.

“We lost many of our youth during immigration attempts,” Abdel Aziz stated during his speech in the Parliament, adding that illegal immigration distorts the image of the country.

Abdel Aziz suggested the provision of close-to-home jobs for the youth, a suggestion which he said would discourage illegal immigration. He said that the huge national projects have provided 2.1 million jobs during the past two years.

He added that the government employees’ total salaries rose from LE 80 billion in 2011, to LE 235 billion currently.

Concerning human trafficking, Abdel Aziz said that some countries exploit underage immigrants and employ them in some industries that lack professional manufacturers, especially in Europe. In addition, these states refuse to send them back to their countries, he added.

In May 2016, Minister of Immigration Nabila Makram said that there were about 2,500 Egyptian kids who have illegally fled Egypt to Italy, and that some people there push these children to work in drug trafficking and prostitution. Makram also revealed in November 2016 that Egypt ranks first in unlicensed immigration worldwide.


The Guardian reported in 2015 that smugglers in Egypt and Libya use children to lead the ships transferring illegal immigrants to Italy.

Suggesting reasons that encourage illegal immigration, Abdel Aziz said that modern technology has led some youth to see pictures of some European countries, compare them with the Egyptian streets and think they would have a better life in these countries.

Smugglers convince some youth that illegal immigration can improve their life conditions, Abdel Aziz said, adding that some families sell some of their assets to grant their sons money to illegally immigrate.


The Egyptian Parliament approved in October the Illegal Immigration and Smuggling Law, which entails tough penalties on whomever assists and/or facilitates an illegal immigration process. The law was drafted by the Cabinet in 2015 and was sent in June 2016 to the Parliament for discussion.


About two years ago, a boat carrying African people from states including Eritrea, Sudan and Somalia capsized off the coast of Rosetta in Beheira governorate while heading to Europe, reportedly killing 203 people of different nationalities, in one of the most sorrowful incidents.

A statement by the Libyan naval forces spokesperson, Ayoub Kassem, said that a total of 503 unregistered migrants, including five Egyptians were rescued by Libya’s border guards, 11 miles north of Sabratha city.

Moreover, the Libyan navy thwarted an illegal migration attempt of 319 persons, including seven Egyptians, in the Mediterranean, 19 miles north of Sabratha city in March 2017.

During the 9th Euro-Mediterranean Association session, Minister of Local Development Abu Bakr el-Gendi contended that the Egyptian government has adopted a comprehensive strategy to combat illegal immigration on the legal, military and cultural fronts.


Gendi pointed out the necessity of supporting the countries that are considered exporters of migrants by providing their youth with decent job opportunities to encourage them to stay in their homelands rather than seek employment overseas.


Offering another effective method for confronting illegal terrorism, the minister of local development suggested that countries open their doors for youth that are seeking quality education. He also praised the efforts of the Euro-Mediterranean regional and local communities in disseminating the culture of expertise exchange, strengthening economic activities in the region, and promoting political dialogue and the practice of democracy.

The International Organization for Migration (IOM) announced that over 3,200 migrants died while trying to cross the Mediterranean in 2016.