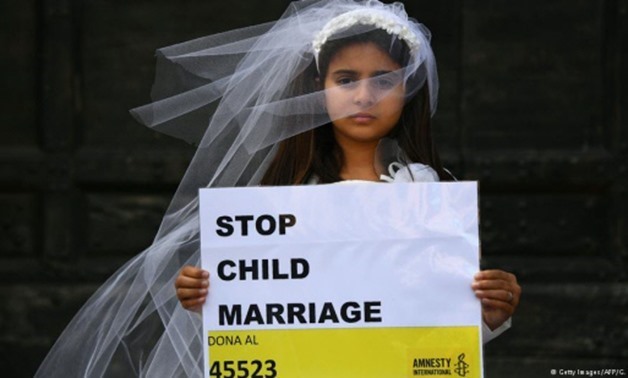 CAIRO – 4 June 2018: Egypt's government has proposed a new draft law that includes amendments to the child law article 12 of 1996 which states cases in which parents could be deprived from the authority of guardianship over the girl or her property.

A father who participates in marrying his daughter or son who is under 18 years of age shall be punished by imprisonment for a period of not less than one year and deprived from his guardianship over her or him. Any person who signs such the marriage contract shall be punished by the same penalty.

Earlier, MP Abla el Hawary has proposed a draft bill that introduces amendments to five laws in the constitution. Topping the laws are the right of guardianship and custody for children (family law).

Hawary told Egypt Today that this bill stipulates that a father who forces his daughter to get married before reaching the age of marriage will be deprived from the authority of guardianship over the girl or her property.

The marriage registrar, who documents child marriages, will be prevented from officiating marriages or will pay fines, and if it’s proved to be a repeated action, he might face a jail penalty of one year.

“Child marriage affects both boys and girls. So, the proposed bill is against it for the protection of both genders. We cannot specify one gender, as it contradicts the constitutional equality principle,” Hawary said. The current law prohibits, but does not criminalize, the registration of child marriages

Hawary called on women's rights associations to launch awareness campaigns in poor neighborhoods around Egypt to warn fathers of the legal penalty they will face if they participate in child marriages.

Hawary asserted that all women parliamentarians in the House of the Representatives supported this bill and signed to approve it.

The draft bill follows calls by Egyptian President Abdel Fatah al-Sisi on September 30, 2017, to impose measures against customary marriage of underage girls. “I was surprised that the number of married 12-year-olds was not low,” Sisi said during a ceremony marking the population census that took place in April.

Recently, many cases have been revealed, attracting attention to the crisis of child marriage in one of the villages of Al-Mahallah al-Kubra, in the middle of the Nile Delta, where a marriage registrar (imam) approved 27 cases of customary marriages for girls below 18 years old.

Because of a law drafted in 2008 as part of Egypt’s Child Law to raise the age of marriage to 18 and prohibiting child marriages, this imam convinced the families of the village that couples could have customary marriages until girls reach the marriageable age, after which the bond would be made legal.

In order to ensure young girls’ rights, the husbands sign on a trust receipt that the marriage registrar (imam) keeps with him.

Yet, a husband of one of the girls in the village refused to register the marriage legally. This action led the mother of the girl to notify the authorities about the imam. Investigations were carried out after a lawsuit was filed by the girl’s family.

In some incidents, girls are divorced or widowed, and left alone to be responsible for bringing up children, even though they are only 12 years old.

According to the 2017 national census released by the Central Agency for Public Mobilization and Statistics (CAPMAS), the total number of women over the age of 18 who could legally get married has reached 27.7 million, with 23 million women married, which includes 119,000 girls who have married before reaching the age of 18.

Meanwhile, 18,000 women got married before the age of 16, representing 15 percent of girls who married before the legal age of marriage. The Ministry of Health reported that 500,000 children are born every year to adolescent mothers.

Among Egypt’s efforts to control the phenomenon, a five-year national strategy to prevent child marriage was launched in 2014. The process was led by the National Population Council, a governmental body that establishes national population policies and strategies in Egypt.

This strategy aims to recognize child marriage as a health and population issue to reduce the prevalence of early marriage by 50 percent within five years, and to fight the proposals to lower the minimum age of marriage.