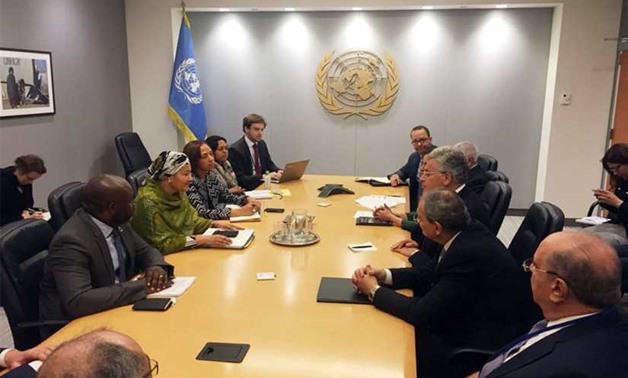 CAIRO – 11 May 2018: An Egyptian high-profile delegation led by the head of the Administrative Control Authority (ACA) Mohamed Erfan, met on Friday with Amina J. Mohamed, Deputy Secretary-General of the United Nations, during a short visit to New York.

The meeting was attended by the minister of investment and international cooperation, Sahar Nasr, the attorney general, Nabil Sadeq, the head of the Central Audit Organization (CAO), Hesham Badawy, the head of the Money Laundering Combating Unit (MLCU), Ahmed Khalil, and Egypt's Permanent Representative to the United Nations, Ambassador Mohamed Idris.

The two sides discussed the intensification of cooperation between the United Nations and the ACA, which represents Egypt in the United Nations Convention against Corruption (UNCAC), providing technical support to the newly launched academy for governance, combating corruption and administrative reform in Egypt.

They also reviewed recent national projects such as the development of Sinai and Upper Egypt, renewing sanitation and water infrastructure, and improvement of educational system within the framework of the strategic agreement between Egypt and the United Nations until 2022.

He pointed out that measures have been taken to develop the business environment and eliminate bureaucracy in order to develop an efficient work environment that ensures overall growth and defeats all obstacles facing investments.

The government has implemented a number of economic reforms and amended a number of laws within the legislative framework to improve the investment environment such as the issuance of the investment law, which includes a number of incentives and guarantees for investors, ensures simplifying investment procedures and reduces the time taken to issue licenses.

head of the Administrative Control Authority (ACA) Mohamed Erfan
During the meetings, the Egyptian side reviewed the growth of investment in Egypt and highlighted the efforts exerted to promote growth opportunities with the participation of the private sector in light of the measures taken by the government to encourage investors and create an investment climate. Stressing the government’s keenness to support entrepreneurship and small and medium enterprises, in view of its role in providing employment opportunities for young people, such as the initiative “your idea of your company” to support emerging companies.

Erfan also met with the Director of the Regional Bureau for Arab Stated at the United Nations Development Program (UNDP), Mourad Wahba, to discuss cooperation framework between the ACA and the UNDP in the anti-corruption field.

During his meeting with Wahba, Erfan gave an overview of Egypt’s key anti-corruption efforts, including the formation of a coordinating national committee to prevent and combat corruption representing all law enforcement agencies and line ministries, from which a sub-committee headed by ACA emanates. Such efforts further included designing an anti-corruption national strategy and holding several training courses for the state’s administrative body, law enforcement agencies and civil society organizations (CSOs) to spread the values of integrity and transparency and to raise awareness of the dangers of corruption and the regulatory bodies’ roles and mandates, in addition to the issuance of a code of ethics.

Both sides discussed the role of the new anti-corruption academy to support policy-making and applied researches, with giving a special focus to eliminating corruption and violence, developing a plan for combating and preventing poverty, supporting ACA’s efforts aiming to enhance transparency and accountability in the main vulnerable sectors such as education and health. In addition, the academy works on facilitating the integration of ACA in regional and global anti-corruption networks, based on international standards and best practices, besides launching another outreach campaign that pinpoints the dangers of corruption and its adverse impact on economy as well as building capacities of ACA staff, especially with regard to the preventive measures which are considered one of the key pillars of the UN Convention against Corruption (UNCAC).

Moreover, Erfan met with Vladimir Voronkov, first under-secretary-general of the UN Counter-Terrorism Office, where they discussed supporting the anti-crime system and modern methods in implementing anti-corruption strategies, and reviews international experiences in this regard.

Erfan pointed out that Egypt plans to develop a comprehensive and sustainable development in the Sinai, adding that the development plan is being implemented in accordance with the instructions of President Abdel Fatah al-Sisi to create jobs and better life conditions for citizens there.

Voronkov said that he visited Cairo in March, praising Egypt's recent chairmanship of the UN Security Council Counter-Terrorism Committee, during which the committee adopted a number of crucial decisions to develop the member states’ capabilities in combating terrorism. He also applauded Egypt's efforts in combating corruption and terrorism, considering it as good model to consider in the Middle East.

Voronkov noted that a UN mission will visit Egypt soon to discuss the establishment of an international counterterrorism center in Sinai, asserting that Egypt has a leading role in combating terrorist groups in the region.

Egypt has a strong legal framework to prevent and to fight corruption, through following steps:

In 2014, Egypt launched a national anti-corruption strategy. It was developed by the National Coordinating Committee for Combating Corruption while its implementation is coordinated by a technical committee headed by the Administrative Control Authority (ACA). The national strategy aims to fight corruption through setting specific objectives, policies, programs and mechanisms to control corruption and create a culture opposed to corruption. It adopts the objectives of raising the level of performance in the government, developing and updating the anti-corruption legislation, strengthening the judicial procedures to achieve prompt justice, strengthening civil society participation in combating corruption, raising living standards and achieving social justice and building trust between citizens and state institutions.