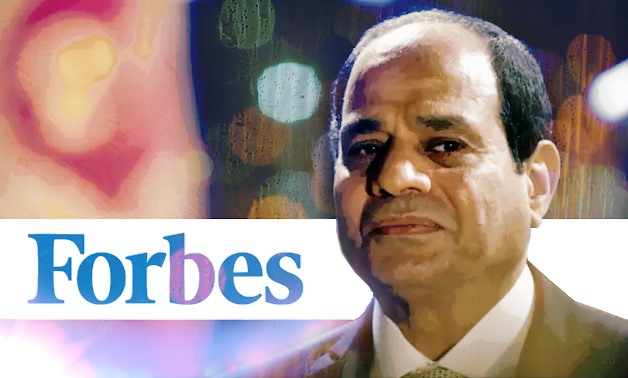 “This year's list highlights the consolidation of power in the hands of an elite few,” according to Forbes – Photo illustrated by Egypt Today/Mohamed Zain

CAIRO – 11 May 2018: President Abdel Fattah Al-Sisi occupied the 45th place among 2018’s Forbes magazine’s list of 75 most powerful figures in the world.

U.S. President Donald Trump fell to the 3rd position in the list.

According to Forbes, the international personalities were classified based on four indicators; namely the number of people controlled by the candidate, the value of the assets, resources managed by the personality, the variety of their influence, and the extent of the strength and powers of the candidate.

“This year's list highlights the consolidation of power in the hands of an elite few,” according to the magazine. “There are nearly 7.5 billion humans on planet Earth, but these 75 men and women make the world turn.”


Born in Cairo on Nov. 19, 1954, President Sisi graduated from the Egyptian Military Academy in 1988 and then began in the infantry corps and later rose to command a mechanized infantry division, then Egypt's northern military zone.

Following Hosni Mubarak's ouster, he was appointed director of military intelligence and reconnaissance; he also became the youngest member of the Supreme Council of the Armed Forces.

In Aug. 2012, he was appointed minister of defense and commander-in-chief of the Armed Forces by ousted president Mohamed Morsy.

After a widespread popular uprising against the Muslim Brotherhood regime in July 1, 2013, Sisi, moved by the voice of the revolution against Morsi, delivered the military’s message that Morsi’s government has 48 hours to meet the demands of the people.

On July 3, 2013, Egypt’s military removed Morsi from power according to the demands of the popular uprising against Morsi and the Muslim Brotherhood.

As he declared his candidacy for president of Egypt on March 25, 2014, he sworn in as a President after winning 96% of the vote on June 9, 2014, vowing to lead the country through significant changes.