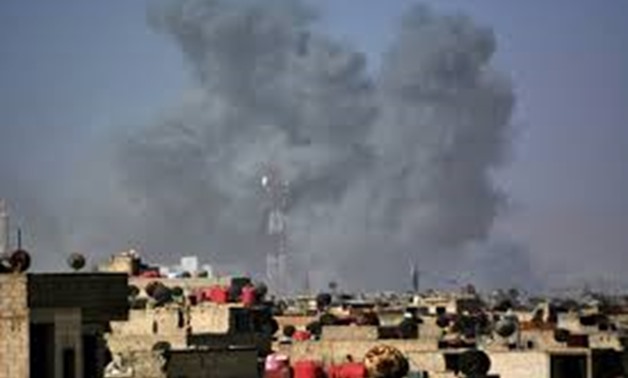 Smoke billows from a southern district of the Syrian capital Damascus during regime strikes targeting the Islamic State group in the Palestinian camp of Yarmuk, and neighbouring districts, on April 20, 2018

2 May 2018: Air strikes killed at least 23 civilians including 10 children in a village held by the Islamic State group in northeastern Syria Tuesday, the Syrian Observatory for Human Rights monitor said.

"We don't know for the moment if the US-led international coalition or Iraqi forces carried out the strike" on the village of Al-Qasr in Hasakeh province, the Observatory said.

The Britain-based monitor relies on a network of sources on the ground for its information.

The US-led coalition, which is backing a Kurdish-Arab alliance fighting IS near Syria's eastern border with Iraq, denied it carried out the strikes.

"There are no strikes in that area reflected in the... strike logs as of today," the coalition said in a written response to AFP.

Iraq has also previously carried out strikes against IS jihadists in Syria, including a raid last month in the eastern province of Deir Ezzor.

The jihadists have lost much of the territory they once controlled in Syria and Iraq since declaring a cross-border caliphate there in 2014.

In Syria, they have faced two separate offensives -- one by the US-backed Syrian Democratic Forces alliance and a second by Russia-backed regime fighters.

In February, US-led coalition air raids killed 25 civilians including seven children in the village of Shaafah in Deir Ezzor province and surrounding areas, according to the Observatory.

The coalition says it takes every precaution to avoid civilian casualties.

Last week, it acknowledged the deaths of 28 civilians in Iraq and Syria in 2017.

That increased its overall death toll of non-fighters killed in coalition strikes since 2014 in both countries to at least 883.

Monitoring group Airwars says the true toll of the bombing campaign is much higher, estimating that at least 6,259 civilians have been killed.