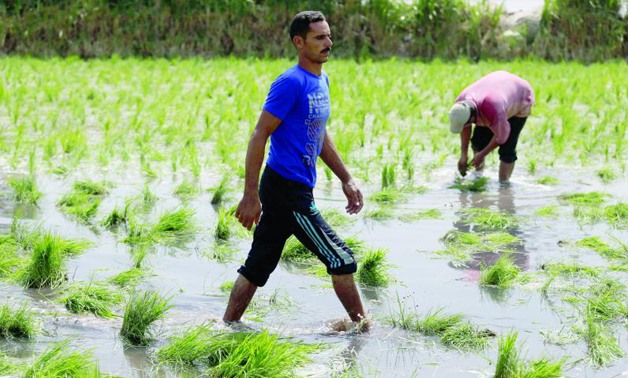 By: Egypt Today staff
CAIRO - 29 April 2018: Minister of Water Resources and Irrigation Mohamed Abdel Ati stressed Saturday that there is no relation between the crisis over the construction of the Grand Ethiopian Renaissance Dam (GERD) and the government’s decision to reduce the area allocated to rice agriculture in Egypt.

During his visit to Dakahlia to lay the foundation stone and inaugurate several projects exceeding LE 200 million, Abdel Ati referred that Egypt had started to reduce rice agriculture areas before the dam was built to rationalize water irrigation due to the limited amount of water and the continuously growing population.

“Rice crops waste huge amounts of water, which could be used in cultivating other crops; hence, rice cultivation has been codified to limit their areas to rationalize water usage,” he added.

Abdel Ati remarked that the amount of cultivated rice that has been determined by the government will suffice domestic consumption in Egypt, stressing that the ministry will not allow for any violation in this regard.

This comes after the Associated Press referred on April 23 that Egypt's parliament passed a law banning the cultivation of some crops that require a large amount of water, amid fears that building the GERD would cut the country's share of the Nile.

Parliament approved on Sunday the government-drafted law to amend some provisions in Agriculture Law No. 53 of 1966.

During the plenary session attended by the ministers of water resources and irrigation and agriculture, a plan to fairly distribute available water amongst agricultural crops was reviewed.

In the same context, the government agreed to amend Article 101 of the law, which stipulates those who violate the ministerial decrees issued to implement Articles 1, 2, 3, and 4 of the Agriculture Law shall be punished with a fine no less than LE 20,000, and no more than LE 50,000.

According to the amended Article 101, those who violate Articles 1, 2, 3, and 4 shall be punished by imprisonment for a period that does not exceed six months and a fine no less than LE 3,000 and no more than LE 20,000.

Water efficiency is considered one of Egypt's national security issues; the Nile River is the country’s most important water source.

The ancient Egyptian culture was built on the sides of the river; the Nile provides Egypt with 95 percent of its water. In 1902, 1906, 1929 and 1959, Cairo signed agreements with the Nile Basin countries which guarantee 55 billion cubic meters of Nile water per year for Egypt.

A further decrease in Egypt's water resources is expected amid the construction of the Grand Ethiopian Renaissance Dam (GERD), which could have a negative impact on Egypt’s Nile water share.

Agriculture in Egypt depends heavily on the Nile River, and it consumes 84 percent of Egypt’s water resources; therefore, the state is working on keeping its water security as much as it can through taking procedures that may help ration water.

The government has taken procedures aiming to ration water consumption through preventing the cultivation of certain crops that need large amounts of water.

Minister of Irrigation and Water Resources Mohamed Abdel Ati decided to reduce the rice agriculture area in Egypt from 1,700,000 feddans to 724,200 feddans (1 feddan = 1.038 acres). According to the ministry, this decline will save three billion cubic meters of water. At the same time, the ministry is working on launching campaigns to raise farmers’ awareness to reduce water usage.

The Ministry of Agriculture has identified 53 varieties of strategic water-saving crops that are adapted to the different environment and climate conditions, focusing on breeding during the coming period, which included seven varieties of rice.