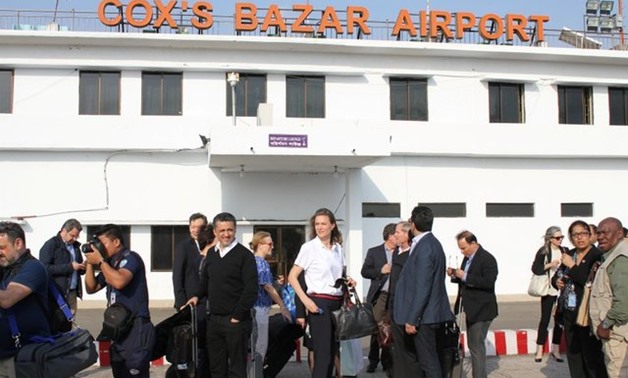 COX'S BAZAR, Bangladesh - 29 April 2018: U.N. Security Council envoys began a four-day visit to Bangladesh and Myanmar on Saturday to see firsthand the aftermath of a Myanmar military crackdown that Britain, the United States and others have denounced as ethnic cleansing of Rohingya Muslims.

They are due to meet Bangladesh Prime Minister Sheikh Hasina and Myanmar's de facto leader Aung San Suu Kyi and travel to Rakhine state, where the violence erupted eight months ago. Myanmar denies the accusations of ethnic cleansing.

Rohingya insurgent attacks on security posts in Rakhine on Aug. 25 sparked the military operation that has sent nearly 700,000 Rohingya fleeing to camps in Cox's Bazar in Bangladesh. Council envoys will visit those camps on Sunday.

The visit puts a global spotlight back on the crisis amid warnings by the United Nations, aid groups and Myanmar's panel of international advisers on Rohingya issues that the coming monsoon season would likely worsen the humanitarian situation.

"We have to push to see how we can speed up the process of the implementation of the bilateral agreement between Bangladesh and Myanmar," said Kuwait's U.N. Ambassador Mansour Ayyad Al-Otaibi.

Myanmar and Bangladesh agreed in January to complete a voluntary repatriation of the refugees within two years.

While the Security Council is united on traveling to the region, there is resistance by Myanmar ally China and Russia - both veto-wielding powers on the council - over how involved the 15-member body should be.

"We care because we are here, but the United Nations is not limited to the Security Council," said deputy Russian U.N. Ambassador Dmitry Polyanskiy. "The threat of raising this issue in the Security Council shouldn't be used as a leverage for the Myanmar government to cooperate."

Britain's U.N. Ambassador Karen Pierce said all council members believed the Rohingya issue was "one of the most significant human rights cases that we have ever faced in the last decade and that something needs to be done" to avoid it causing instability in Bangladesh and Myanmar.

"How one goes about that, the prominence that one gives to the individual government, particularly the Burmese government, tends to be what divides the council and that's the old sovereignty versus human rights debate," she said.

Buddhist-majority Myanmar has for years denied Rohingya citizenship, freedom of movement and access to many basic services such as healthcare and education. They are considered illegal immigrants from mainly Muslim Bangladesh.

Fleeing refugees have reported killings, rapes and arson on a large scale. Myanmar has said its operations in Rakhine were a legitimate response to attacks on security forces by Rohingya insurgents.

The prosecutor of the International Criminal Court has asked it to rule on whether it has jurisdiction over the deportations of Rohingyas to Bangladesh, a possible crime against humanity.

The U.S. government is conducting an intensive examination of alleged atrocities against Myanmar's Rohingya that could be used to prosecute Myanmar's military for crimes against humanity, U.S. officials told Reuters on Wednesday.

The European Union on Thursday extended its arms embargo against Myanmar, following human rights violations in the country, and was preparing sanctions against individual army officials.