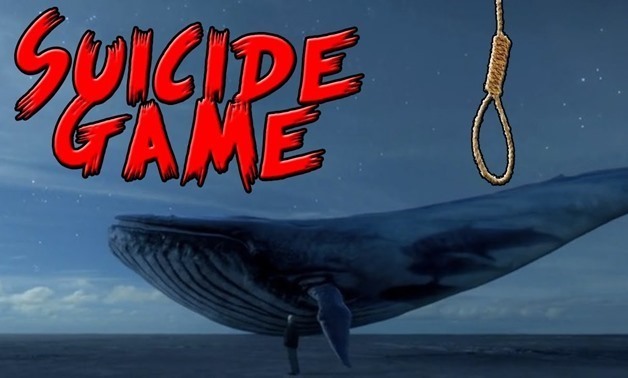 CAIRO – 21 April 2018: One of the victims of the Blue Whale game, who survived an assassination attempt, revealed details of what had happened to him and how his family helped him get rid of the game trap.

The 21-year-old Suez resident, Mohamed Ahmed, said that he fell under the influence of the Blue Whale game after he had long suffered from psychological problems as a result of some clashes between him and his friends, which prompted him to escape his problems by playing the game.

"At the beginning of the game, I used one of the sharp objects to draw the whale on my hand. During this time, I lost control over myself, my mind and all senses,” Ahmed said, stressing that he fell under the control of the game in a strange and incomprehensible way, especially after he was ordered to read some words in Hebrew.

Ahmed stated that he was seeing ghosts in the mirrors of his house and on the walls at the latest stages of the game.

Ahmed explained that he was later asked to harm his family and then to commit suicide. “At this point, my family intervened and began to control me as they confirmed. At times I did not feel what was happening.” He called on all young people to stay away from this game and not to think about its experience because it is deadly and destructive and it ends either by death or suicide.

Despite the awareness campaigns that have been raised recently in media outlets against the deadly online game, Beheira Governorate has seen another case of an Egyptian teenager committing suicide after playing the game, putting in question the effectiveness of these campaigns.

In the wake of the death of former parliamentarian Hamdy Al-Fakhrany’s son, which was also linked to the Blue Whale game, Dar Al-Ifta issued a fatwa (religious edict) prohibiting playing the online game.

In its statement, Dar Al-Ifta stated that suicide, in all its forms, is strongly prohibited and considered one of the greatest sins in Islam, adding that the Blue Whale goads people into killing themselves and therefore playing it is a sin.

Egypt is not the first Arab country to witness a suicide attempt because of the Blue Whale game. Many Arab countries have been on edge due to the number of Arab teenagers getting involved in the game. In Algeria, at least four teens have killed themselves while playing the game, and experts warn that the effect could be far-reaching.

Since starting in Russia, the game has been linked to at least 130 teen deaths across Russia.