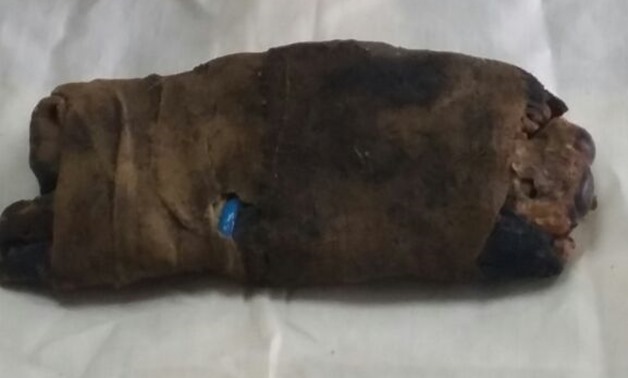 By: Egypt Today staff
CAIRO – 11 April 2018: The Ministry of Foreign Affairs handed over three monuments from Egypt’s ancient civilization to the Ministry of Antiquities on Tuesday, April 10, after being reclaimed from the United States.

The three pieces from Luxor’s Valley of the Kings, which were smuggled out of the country in 1927, were captured by the American authorities after being offered for sale in a New York City auction house.

Assistant Foreign Minister for Cultural Relations Heba al-Marasi said in statement that the three pieces were examined before being handed over to the Ministry of Antiquities. All of the pieces were confirmed to be original.

According to the statement, the procedures to deliver the smuggled Egyptian pieces had been undertaken between both countries since last November. “The coordination between both authorities during the past period represents the strong relations between them,” Marasi stated.

Two mummified hands and one head were reported to have been handed over by the American general prosecution office to the Egyptian consulate in New York City, and then to the authorities in Egypt.

Egypt’s Ministry of Foreign Affairs thanked the American authorities for their continuous efforts and keenness to preserve the strong mutual relations between both countries.

On March 15, Kuwaiti authorities discovered a smuggled coffin lid inside a sofa at the Kuwait Airways cargo terminal when officers scanned a shipment of office furniture that had come from Egypt.

Kuwaiti archaeology experts said that they are “almost certain” that a stone coffin lid dating back to the pharaonic era was found within a sofa. A Kuwaiti official announced that communications between both countries will take place regarding the smuggled coffin.

A team of specialists from Kuwait and Egypt was announced to examine the artifact. The antique is 170 centimeters long, looks like a statue with an elaborate headdress, and is carved in stone.

Sources from the National Council for Culture, Arts and Letters of Kuwait (NCCAL) revealed that the antique will be sent back to Egypt if Egyptian experts agree with their findings, as part of Kuwait’s efforts to face illegal smuggling of antiquities from foreign countries.

Ministry of State of Antiquities Egyptian student attacked in Warsaw by 4 men, FM follows up