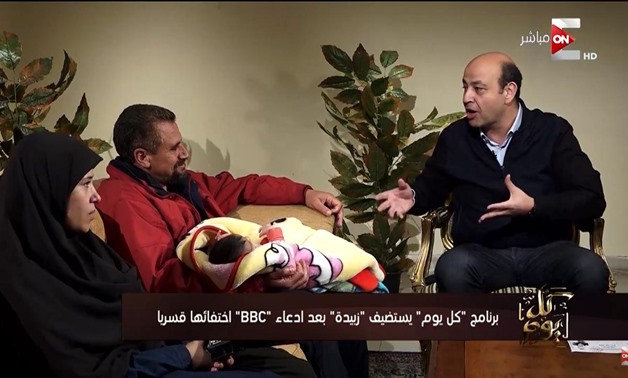 CAIRO – 27 February 2018: The Egypt State Information Service (SIS) issued a statement on the appearance of Zubeida Ibrahim, who was mistakenly reported by BBC to be enforced disappeared in Egypt, on a talk show aired on ON E Monday night, criticizing the unprofessional reporting and allegations made by the English network on the situation in Egypt.

SIS said that Ibrahim’s interview with ON E entirely disproves the authenticity of the BBC report on her enforced disappearance and torture. The statement stressed the authenticity of the remarks and criticism mentioned in the SIS earlier statement in response to the BBC report regarding the other issues it included, biased attitudes and personal impressions adopted by the report writer towards Egypt.

“The appearance of citizen Zubeida emphasizes what was mentioned in the SIS earlier statement regarding the BBC report’s lack of internationally recognized journalistic and media professional norms and standards as well as the rules and regulations adopted by the BBC,” according to SIS.

The Monday statement demanded the BBC to “issue an immediate apology in the same manner the BBC documentary report was aired and published for the gross professional error regarding citizen Zubeida, to the extent of absolute falsification and fabrication.”

It also asked the English network to take into consideration the remarks mentioned in the SIS earlier statement and take all necessary professional and administrative measures to correct the errors and violations included in its report.

Egyptian TV host Amr Adeeb met on Monday Egyptian citizen Zubeida Ibrahim who was alleged to be forcibly disappeared by BBC recently published report under the title “The Shadow over Egypt”.

BBC report claimed that Ibrahim disappeared on 8 April 2017, according to statements given by her mother.

Adeeb interviewed Ibrahim who revealed that she has been married for a year with a son called "Hamza" and she lives at Faisal neighborhood.

Ibrahim told Adeeb that she has not been talking to her mother for a year, the young female chose not to reveal the reason behind her disagreement with her mother.

Ibrahim also added that she was jailed once for 4 months along with her mother for joining a pro Muslim Brotherhood protest. However, she denied being tortured when she was jailed in El Qanater prison.

Ibrahim’s husband said that he married her on 13 March 2017 without her family’s consent, he showed the marriage document which dates back to March 2017, unlike what BBC alleged. BBC claimed that Ibrahim was forcibly disappeared on 8 April 2017.

Ibrahim said that she has joined Muslim Brotherhood’s Al Nahda sit-in back in 2013 for 10 days along with her mother.

The couples admitted during the interview their previous connections with the Muslim Brotherhood, a connection the couple chose to abandon later.