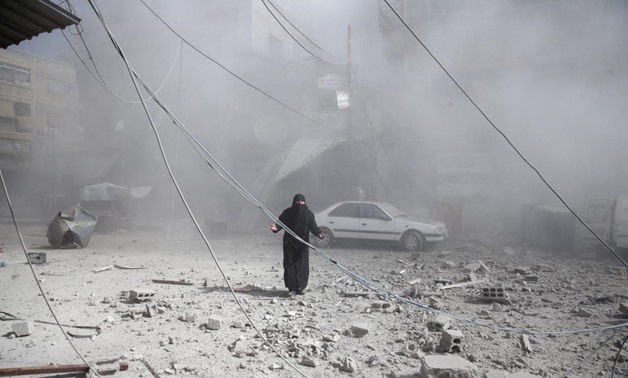 A woman gestures as she walks on rubble of damaged buildings after an airstrike in the besieged town of Douma in eastern Ghouta in Damascus, Syria, February 7, 2018 – REUTERS/ Bassam Khabieh

CAIRO – 8 January 2018: Russian and Syrian government forces conducted air and artillery strikes on Eastern Ghouta killing an estimated 170 civilians in the Damascus suburb since the onslaught intensified on Monday.

The strikes killed over 30 civilians on February 5, according to the monitor groups. The civilian death toll in Eastern Ghouta increased drastically the next day to 80, around half of which were women and children, according to the British-based Syrian Observatory for Human Rights. Yesterday, February 7, an estimated 36 civilians were killed in air raids.

“This was the highest civilian toll in Syria in nearly nine months, and one of the bloodiest days for Eastern Ghouta in several years,” the head of the Britain-based monitoring group told AFP, in reference to February 6.

The bombardment pressed the United Nations to call for a ceasefire to “this extreme situation.”

Officials called for “an immediate cessation of hostilities lasting for at least one month throughout Syria to enable the delivery of humanitarian aid and services, evacuation of the critically sick and wounded, and alleviation of people’s suffering, to the extent possible, wherever they are.”

Almost 400,000 residents of Eastern Ghouta, a suburb of the capital Damascus, have been caught in a regime siege since 2013. Many residents are in desperate need of medical care, but Russian-backed forces have targeted hospitals as a means to drive the population into desperation.

Violence and suffering has shown no sign of relenting in Syria. Since the military victory against ISIS, Russian and Syrian government forces have focused once again on the original domestic threat. Consequently, there has been an escalation in military activity and violence in both Eastern Ghouta and Idlib in particular.

This increased sharply this week in response to the shooting down of a Russian jet, flying over Idlib, by rebels on February 4. The Russian pilot ejected and was subsequently killed. Videos on social media depicted a fire fight with rebels on the ground, until the pilot was killed by a grenade.

Because of the rebel’s stronghold in Eastern Ghouta is in close proximity to the capital, it is a key target for the Russian-backed Syrian government. The territory holds value for both groups. If the Syrian government is to recover Eastern Ghouta from rebel forces it would serve as a major knock to their moral, as such for the rebels to control territory close to the President’s residence is a symbolic show of strength.

The opposition has controlled much of Eastern Ghouta since 2012, and has been under an unrelenting siege since 2013. In 2013 thousands of people in the besieged rebel district of Damascus suffered a sarin gas attack, a chemical agent that targets the central nervous system. The death toll is unknown, and estimates range from at least 281 to 1,729.

A man is seen near the remains of a rocket in Douma, Eastern Ghouta in Damascus, Syria January 22, 2018 – REUTERS/Bassam Khabieh

All places with a high population density, including residential areas, schools, markets and hospitals have been targeted by Syrian-allied forces.

Monitor group, the Syrian Network for Human Rights (SNHR), documented the killing of 369 civilians, in Eastern Ghouta from January 1, 2018, until February 7. The civilian death toll from the Russian and Syrian government siege included 63 children and 72 women.

“What is happening in Eastern Ghouta is not simply a humanitarian crisis because aid is denied, these sieges involve the international crimes of indiscriminate bombardment and deliberate starvation of the civilian population,” stated Mr. Pinheiro, Chairman of the Independent International Commission of Inquiry on the Syrian Arab Republic.

The siege has created a dire humanitarian situation, in which access to food and vital medical supplies are very limited. According to the United Nations, almost 12 percent of children under five suffer from acute malnutrition in Eastern Ghouta; the highest rate recorded since the conflict began.

SNHR documented the death of 12 civilians from November 14, 2017 to February 1, 2018, due to starvation and lack of medication in Eastern Ghouta.

Civilians continue to bear the brunt of the conflict. While Russia and the Syrian government claims that rebel groups – “terrorists” – are the focus of strikes, evidence showing the civilian cost of the war makes this impossible to believe.

Two-and-a-half year old Hala al-Nufi, who suffers from a metabolic disorder which is worsening due to the siege and food shortages in the eastern Ghouta, reacts as she sits on a bed in the Saqba area, in the eastern Damascus suburb of Ghouta, Syria, October 25, 2017 – REUTERS/Bassam Khabieh

Eastern Ghouta was designated as one of several "de-escalation zones" by backers of the Syrian government – Russia and Iran – as well as Turkey who oppose the government. Yet evidently, it has not been implemented. With the three strongest factions in the war acting as custodian of the agreement, fighting was supposed to slow down in order to pave the way for negotiations.

Despite the “de-escalation” agreement, violence has intensified.

The increased in attacks has made a “mockery” of the “so-called ‘de-escalation zones’,” according to Mr. Pinheiro.

The deal which promised a pause in hostilities with the hope of a ceasefire agreement has simply been a Russian-led strategy to manage the war to its advantage. Since the agreement came into place the Syrian opposition has been severely weakened, and government forces have made major advances in winning territory. The conflict is far from over.