Analysis: MB's betrayal of January revolution is no surprise 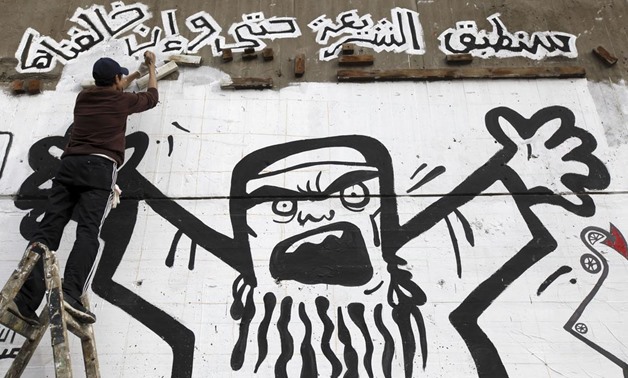 CAIRO – 22 January 2018:"President Hosni Mubarak has decided to step down from the office of president of the republic and has charged the military high council to run the affairs of the country," said Egypt's late Vice President Omar Suleiman on February 11, 2011.

Suleiman's remarks looked as a happy ending for the 18-day sit-ins and protests that overwhelmed Egypt's governorates and squares. Millions of protesters demanded the overthrow of Egyptian President Hosni Mubarak, following several days of clashes and violent acts at Tahrir Square in central Cairo and other squares across the country, resulting in the murder of hundreds of civilians by police bullets, unidentified snipers and third-party elements.

The Brotherhood members bit the hands that fed them and betrayed all of their allies and supporters. The Brotherhood's betrayal was not a surprise to many observers who realize the betrayal was inevitable because history always repeats itself.

On January 28, 2011, “the Friday of Anger” as protestors named it, the Muslim Brotherhood group declared its participation in the demonstrations, which rapidly tuned into a revolution by the Egyptian rebels who had began the spark of the revolution on January 25, 2011.

The Muslim Brotherhood group was outlawed several times throughout Egyptian history until it has been listed as a terrorist group by the Egyptian regime in December 2013.

When the revolution succeeded in toppling Mubarak, the rebels left squares and streets that they had sat in for 14 days. None can deny the role of the Muslim Brotherhood during the January revolution, but that role was not 100 percent positive. The protesters had declared their revolutionary demands as bread, freedom and social justice.

Roughly one year after the overthrow of Mubarak by the rebels' resistance, Brotherhood-affiliated Mohamed Morsi was elected as the president of Egypt. Morsi, who was toppled by similar demonstrations, failed to meet January's demands, so protesters took to streets nationwide and ousted him on July 3, 2013.

Following the January revolution, the Muslim Brotherhood obtained dozens of privileges. For example, senior Brotherhood member Sobhi Saleh was chosen to take part in the Constitutional Amendments Committee, which was formed immediately after the overthrow of Mubarak.


Post-July revolution in 1952, all political parties were dissolved, but the Muslim Brotherhood organization had not dissolved because many of its high-profile members had been in official positions, such as Sheikh Ahmed Hassan al-Baqoury, who was one day a minister of religious endowments.

Many of the Brotherhood leaders took part in drafting the constitution in 1954, such as Abdel Qader Ouda, Hassan Ashmawy, Saleh Ashmawy and Mohamed Kamal Khalifa.

Late President Gamal Abdel Nasser tried many times to embrace the group, but the Brotherhood’s greediness and arrogance led to many assassination attempts in order to seize power in Egypt.

In 2002, former Saudi Interior Minister and Crown Prince Naif Bin Abdulaziz revealed in an interview with Kuwaiti-owned Alseyassah newspaper that the kingdom had supported the group in many historical phases, but it stopped backing the Brotherhood after being betrayed by it.

"‘I say it without hesitation: All of our problems . . . came from the Muslim Brotherhood. When their circumstances became tough and gallows were set up for them in their countries, they [Brotherhood] relied on the kingdom, which saved their lives and their dignity and made them safe. We hosted them, which is our duty . . . We found work for them . . . opened our schools and universities for them, but unfortunately they did not forget their previous links and were set on recruiting people and establishing [political] trends and turned against the kingdom," said Naif Bin Abdulaziz in the mentioned interview.

"Without people like Sayyid Qutb and Hassan Al-Banna, and books like ‘Milestones’ and ‘The Messages of Da’wa’, or concepts like Al-Hakimiyyah (divine rule) and Ustaziatul Alam (mastership of the world), there would have been no Islamist terrorism today. There would be no terrorist chiefs like Osama Bin Laden, Ayman Al-Zawahiri, Abu Musab Al-Zarqawi or Abu Bakr Al-Baghdadi.

There would be no Khalid Islambouli, who assassinated President Sadat. There would be no jihadist ideologues like Abdullah Azzam, Abdul Majeed Al-Zindani," wrote Saudi columnist Mshari Al-Zaydi on February 15, 2015 in Saudi-owned paper Asharq Al-Awsat.

While Morsi had talks and consultations to form the first government after the revolution, Yasser Burhami, vice-chairman of the Salafist Dawa group, which was the most prominent organized Salafist movement then, issued a "fatwa" banning the assignment of the VP post to a Copt or a woman, in an obvious rejection of Morsi's pledges that he had given to Egyptians during his presidential campaigns.

Salafi members of parliament are seen during the first Egyptian parliament session, after a revolution ousted former President Hosni Mubarak, in Cairo January 23, 2012. Egypt`s parliament opened on Monday for the first time since a historic free election put Islamists in the driving seat after years of repression under Mubarak. REUTERS/Asmaa Waguih

Burhami's fatwa was not the first dispute between the Muslim Brotherhood group and the Salafists. Ex-Brotherhood leader Abdel Monem Aboul Fotouh had enjoyed Salafist support during the first round of the presidential elections against former Prime Minister Ahmed Shafik and Mohamed Morsi, before Salafists gave up on him in favor of Morsi, who promised them many powers.

In his speech at Tahrir Square, a few days after Morsi swore the oath as the new president, he sought to court the Salafist stream noticeably by adopting the case of the spiritual father of the Islamic Group, Omar Abdul Rahman.

The withdrawal of the Brotherhood group from the sit-in at Tahrir Square brought Morsi under sharp criticism by Salafists, who had mobilized at the Square to celebrate the success of the first Islamist president and forced members of the most hardline Islamic Tahrir Party to issue a statement criticizing Morsi.

Brotherhood stabbed rebels in the back

In October2012, Egypt witnessed a bloody Friday when violent clashes took place between pro-Brotherhood groups and revolutionaries at Tahrir Square. Experts called it "a black day for the revolutionary state in Egypt."

Dr. Mostafa Hegazy, head of Nassaq Foundation for Strategic Thought, told Shorouk newspaper on October 15, 2015, that "the attacks led by the Brotherhood group on the demonstrators aimed at purging political life of the opposition in line with the Brotherhood's monopolization of governance, the opposition and the revolution, in addition to the fact that they monopolize the silent bloc, speaking in its name and interpreting its silence as satisfaction with the status quo."

A column of Abrams tanks line the street as Egyptian demonstrators gather in Tahrir Square in Cairo, on Jan. 30, 2011, the sixth day of protests against Hosni Mubarak's regime. (Miguel Medina/Getty Images)

The Brotherhood wished to set revolution priorities by themselves, and their priorities at that time focused on exercising pressure in order to force Public Prosecutor Abdul Megeed Mahmud to leave office. However, national forces contravened their orientations and insisted on resuming the million-man demonstration it had prepared in order to condemn Morsi's failure to implement the demands of the revolution.

Dr. Ashraf al-Sherif, professor of Political Science at the American University in Cairo, described the repeated clashes between the rebels and the Brotherhood supporters as "the guise of fascism; which is a reflection of the Brotherhood's tactic to curtail the opposition and try to change their demands by being among them."

After reaching the presidency, the Brotherhood aimed to silence the voices opposing Morsi via their attacks on the opposition forces in Tahrir Square.

Supporters of the Muslim Brotherhood and ousted Egyptian President Mohamed Mursi gesture with the "Rabaa" sign during a protest in Al-Haram street, in Cairo December 13, 2013. REUTERS/Stringer

The Brotherhood group refrained from attending sessions of the National Dialogue and the National Accord after the revolution directly, although the group was the first group that sat with Vice President Omar Suleiman during the revolution individually before the general session with various political powers.

The group and its party also gave up on the Democratic Alliance inside al-Wafd Party and refused to attend their meetings.

In an interview with Pan-Arab al-Hayat newspaper on June25, 2013, former presidential candidate Hamdeen Sabahi admitted that the Muslim Brotherhood was the true ruler of Egypt during the era of Mohamed Morsi, not the president himself.

He manifested that "one year after President Morsi took office, we realized that the Brotherhood's method of administrating the Egyptian state, whether at presidency or the cabinet, leads to more increasing greed for possessing posts."

Their idea of empowerment and possessing as many institutions and apparatuses of the state is more important for the group than completing the revolution or achieving its goals. Their sole dominance over power was more important than realizing the goals of the people who brought them to power through elections.

A man walks past a poster in Cairo by a group known as Youth Against Violence. The poster calls on voters not to choose Muslim Brotherhood candidates in parliamentary elections in November 2009

The Brotherhood has proven in one year that they were against any national plan that may unite Egyptians. They had another plan that was unrelated to the Egyptian role; they aimed to Brotherhoodize Egypt.

The revolution expressed the unity and diversity in society. Muslims and Copts were there at Tahrir Square; there were people from Sinai and from Nubia; there were workers, farmers, middle-class members. There were all forms of political orientations: Islamists, leftists, liberals and pan-Arabs.

After winning the presidential race in 2012, the Brotherhood stole that diversity spirit and solely possessed the state.

The last to join the revolution was the Muslim Brotherhood group on January 28. They were keen on staying at the back, letting the revolutionaries face security forces alone.

Brotherhood has no dear one

In his book "Who killed Hassan al-Banna?", Mohsen Mohamed revealed that the group abandoned the man who killed Mahmoud El Nokrashy Pasha on December 28, 1948, despite being one of the group's members.

Banna issued a statement on the assassination of Nokrashy, saying that he "condemns that act and that the Brotherhood had not been involved in the operation."

Therefore, veterinary medicine student Abdul-Migeed Ahmad Hassan, who committed the assassination of Nokhrashy, felt betrayed and confessed that he was part of the Secret Organization. The student even accused Banna of knowing about the incident beforehand and approving it. Later, the student confessed of having nine other accomplices.

Nevertheless, Banna completely denied knowing the student and said that he did not know whether he was a member of the Brotherhood or not.

Royal Court Chief Ibrahim Abdul-Hadi was assigned to form the new ministry, where documents stipulated that the mission of the new ministry was to destroy the Brotherhood.

At Nokrashy’s funeral, mourners demanded to have Hassan al-Banna killed, chanting "an eye for an eye."