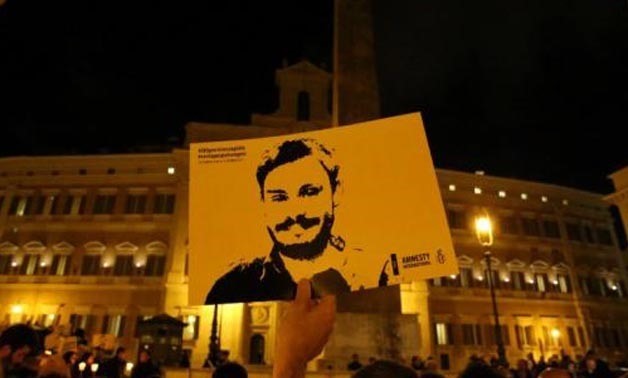 : A man holds a placard during a vigil to commemorate Giulio Regeni, who was found murdered in Cairo a year ago, in downtown Rome, Italy January 25, 2017. REUTERS/Alessandro Bianchi

It was added that Abdel Rahman has had a huge impact on Regeni’s case’s investigations. Both the Egyptian and Italian security forces are still investigating and following new evidences in the case.

Telephone recordings of Abdel Rahman during the period of January 2015 until February 2016 are expected to be examined by the Italian prosecutor according to the local media outlets.

Maha Abdel Rahman became a recluse for about a year after Regeni’s murder, with some claiming that she had disappeared. This behavior was justified at the time by saying that she was suffering from severe depression following her student’s death. However, others thought that she was hiding or avoiding participating in the investigations.

While being questioned by the Italian prosecutor, Abdel Rahman mostly answered with “I don’t remember,” and “I don’t know,” which further heightened doubts about her.

The professor’s laptop and some of her documents and papers were seized by the Italian security forces as part of the investigations; however nothing has yet been revealed.

Alfano’s decision came after his meeting with his UK counterpart Boris Johnson on December 6, who clarified that "a British judge has accepted the European investigation warrant and therefore the Cambridge tutor can be questioned,” according to BBC.

President Abdel Fatah al-Sisi stated in a meeting with Italian Prime Minister Paolo Gentiloni that Egypt is keen to penalize those involved in the homicide of the Italian researcher.

On January 25, 2016, the 28-year-old Italian postgraduate student disappeared in Cairo, only for his dead body to be found on February 3 alongside the Cairo-Alexandria highway, bearing signs of extreme torture and beating, according to Reuters. This murder has led to strained relations between Italy and Egypt.