What to know about church attacks in Egypt 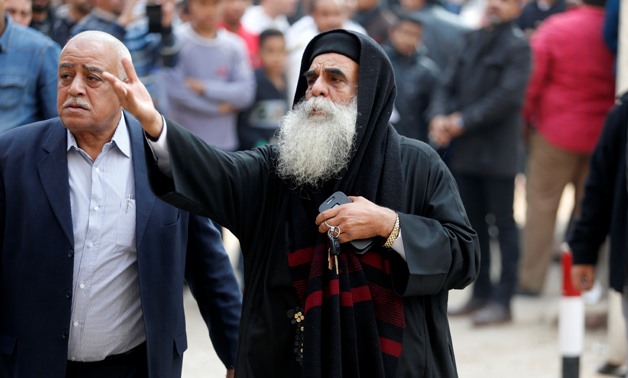 A priest reacts at the site of attack on a church in the Helwan district south of Cairo, Egypt December 29, 2017. REUTERS/Amr Abdallah Dalsh

CAIRO – 29 December 2017: At 11 a.m. of December 29, terrorist elements carried out an attack on a church in Helwan that led 10 to die, and five more to be injured. The Ministry of Interior’s security personnel dealt with the attack and stopped the terrorist from entering the church and detonating a bomb inside of it.

“We managed to handle the situation and stop the terrorist from killing more people. We wish we could have stopped him from killing anyone at all, but that is exactly why security plans and measures are being improved. Improving security plans will lead to less civilian and security causalities,” Lieutenant Fouad Allam, a member of the National Council of Terrorism, stated to Egypt Today.

Allam requested that there be a central surveying operations room that surveys and follows any suspicious moves and deals with them immediately. “Forces that are responsible for protecting and securing churches need to be equipped with more weapons and better equipment. There should be fighting platoons as well, especially during festive seasons. This will help them deal better and more efficiently should similar situations arise,” Allam explained.

On the other hand, Khaled Okasha, a security expert and a member of the National Council of Counterterrorism, stated that the terrorist was not able to enter the church and “that is a victory for the state.”

Ibrahim Ismail, who the Ministry of Interior identified as the terrorist behind the attack, has been known to participate in Rabaa sit ins before. Ismail would go to his home then back to the sit-in and was a Muslim Brotherhood supporter. Ismail used to support Hazem Abu Ismail as well.

The terrorist was known to have participated in carrying out an attack on a minibus that belonged to the Ministry of Interior back in May 8, 2016, where a policeman and seven ministry personnel were killed, while two others were injured. State security are investigating and interrogating the terrorist’s family at the moment.

On previous attacks that targeted Copts:

Christians as a segment of society in Egypt have witnessed and participated in causing every drastic change in it. Taking the most recent event, the Pope of the Coptic Orthodox Church in Egypt and Alexandria, Pope Tawadros II, has refused to see U.S. Vice President Mike Pence following President Donald Trump’s declaration of Jerusalem as the Israeli capital.

Looking more closely at the past year and what has changed since the events of the Arish and Tanta churches’ attacks, the government has also supported their participation and sacrifices adamantly. In terms of the global and local concerns that Christians in Egypt felt or were indeed marginalized, several analyses respond to these concerns. Firstly, as a community in Egypt, Christians in general tend to act and move in flocks. Their permeation in society is not as apparent as it is on ground and that can be attributed to media portrayal in Egypt. Not only has media enforced the idea that Copts or Christians (since the country houses more than one branch of Christians; there are 500,000 protestants and 160,000 Catholics living in Egypt as well) are a secluded segment of the Egyptian society, they have also enforced the idea that they are not welcome to integrate.

Women pass by the Coptic church that was bombed on Sunday in Tanta, Egypt, April 10, 2017. REUTERS/Mohamed Abd El Ghany
In reality, the truth is much more complicated. While yes, one cannot deny that Christians and Muslims do treat one another with a certain kind of sensitivity, but the portrayal and interpretation of this sensitivity is most of the time misunderstood. This kind of sensitivity is respect for one another’s beliefs. It is a safeguard that each segment uses to ensure that they are not offending one another, that even if they disagree with one another’s beliefs, they disallow their disagreements from clouding their judgment.

Aside from their integration in society, Christians were also misrepresented in media to show that they were a favored target for attacks and “cleansing”. As recent events have shown, especially that of the Al-Rawdah attack, that is not the case. A popular conspiracy theory took ground after the removal of Muslim Brotherhood affiliated President Mohammed Morsi that the Muslim Brotherhood was targeting Christians and churches to cause strife in society.

In retrospect, Christians’ voices during the June 30, 2013 revolution that ousted Morsi were the loudest. It is not farfetched to consider a theory that connects that with the attacks on their churches that ensued. The attacks on the Alexandria and Tanta churches that took place in April 2016 were not separate or individual incidences. Many other attacks also took place on sacred premises and Christian properties in many provinces such as Giza, Fayoum, Al-Manial, and Sohag governorate.

The government of Abdel Fatah al-Sisi has considerably attempted to reinstate and protect many of Christians’ rights in Egypt. To begin with representatives of the three present Christian sects attended and participated in the drafting of the constitution in 2014. To that end, several articles were drafted in the constitution to ensure Christians’ position in the country and to secure them.

People watch as the coffins of victims arrive to the Coptic church that was bombed on Sunday, in Tanta, Egypt, April 9, 2017. REUTERS/Mohamed Abd El Ghany
Perhaps of the most important articles concerning Christians that were drafted in the 2014 constitution is Article 3 which states that “The principles of the laws of Egyptian Christians and Jews are the main source of laws regulating their personal status, religious affairs, and selection of spiritual leaders.”

Another pivotal article that ensures the freedom and rights of Christians is Article 53, which grants every citizen in the country equal rights before the law and equal opportunities for growth. Article 53 also outlaws discrimination on the bases of “religion, belief, sex, origin, race, color, language, disability, social class, political or geographical affiliation, or for any other reason.”

Egyptian Christians shout slogans as ambulances transport the bodies of victims killed in the bombing of Cairo's main Coptic cathedral after the funeral, in Cairo, Egypt December 12, 2016. REUTERS/Amr Abdallah Dalsh
Of the strongest and perhaps most conciliatory articles that the government has drafted after the ouster of Morsi and the damages that ensued was Article 235, which renders the construction, reconstruction, and renovation of churches a legal duty. “In its first legislative term after this Constitution comes into effect, the House of Representatives shall issue a law to organize building and renovating churches, guaranteeing Christians the freedom to practice their religious rituals,” the article states.

Indeed, several churches have been re-inaugurated after suffering sustainable damages from attacks. Of the two churches that were targeted last year, Mar Girgis Church was reopened to its congregation earlier this month in Tanta after the completion of its renovations. The church was attacked on April 9 and 40 died while more than 70 others were injured during an explosion on Palm Sunday.

Another Evangelical church was also re-inaugurated and celebrated after enduring an attack by Morsi supporters. The Evangelical Church is the last Christian establishment to be restored among 69 sabotaged and burned churches in Minya. The restoration works were carried out by the Engineering Authority of the Armed Forces and mandated by President Abdel Fatah al-Sisi.

Between the Egyptian state and society, Christians are becoming more on par with Muslims in terms of equality and the security of their rights. Instead of attempting to reinforce their marginalization in society as Syria does with its minorities for instance, the Egyptian state’s policies and regulations appear to be aiming for the opposite.