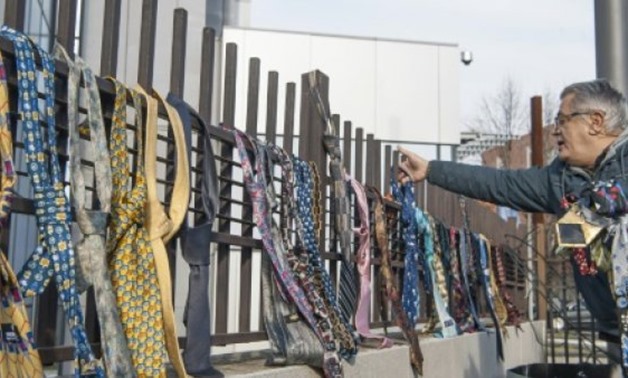 PRISTINA - 26 December 2017: Angry Kosovans hung hundreds of neckties on the fence outside the government's headquarters on Tuesday in protest after its leader justified doubling his own salary by saying that wearing smart clothes was part of his job.

Protesters hung some 300 ties of various colours and patterns and even the odd shirt in a gesture of scorn aimed at premier Ramush Haradinaj.

Ordinary Kosovans scrape by on a fraction of that. Kosovo's unemployment and poverty rates are about 30 percent.

Defending the move in an interview last week, Haradinaj said: "I am obliged to wear a tie. I cannot go out dressed any old how. I must have a shirt."

For Tuesday's protest, campaign group Beyond The Wall collected ties to hang on the fence.

Haradinaj "must not forget that he represents people who do not have a tie problem, but who do have a problem with being poor," said one of the group's leaders, Kushtrim Mehmeti.

One of the protesters who came to hang a tie, 67-year-old retiree Halil Xani, said he earned just 75 euros a month.

He would have to work about three and half years to earn what the prime minister earns in a month.

Kosovo unilaterally declared independence from Serbia in 2008, a move that Belgrade does not recognise.