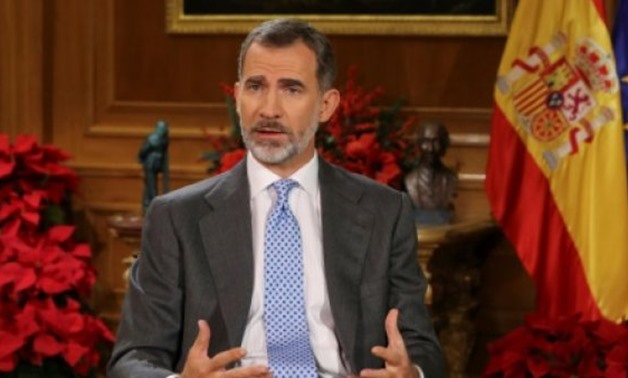 © POOL/AFP / by Serene ASSIR | Spain's King Felipe VI delivers his Christmas Eve message at the Royal Palace in Madrid on December 24, 2017, where he urged Catalan lawmakers to avoid a confrontation over independence

MADRID - 25 December 2017: Spain's King Felipe VI in a Christmas speech on Sunday urged Catalan lawmakers to respect their region's diversity and avoid another confrontation over independence.

The wealthy northeastern region's newly elected parliament must "face the problems that affect all Catalans, with respect to plurality and bearing in mind their responsibility to the common good," the monarch said.

"The road cannot lead again to confrontation and exclusion, which as we already know generate nothing but discord, uncertainty and discouragement," he said at his Madrid residence, flanked by Spanish and EU flags.

Spain's central government called the election after sacking Puigdemont's cabinet, dissolving the Catalan parliament and stripping the region of its treasured autonomy following an independence declaration on October 27.

The declaration rattled a Europe already shaken by Brexit, and inflamed passions across Spain.

It followed a banned independence referendum on October 1, which saw a brutal police crackdown that focused the world's attention on the Catalan crisis.

Two days after the referendum, Felipe made a rare televised speech, condemning the separatists' "unacceptable disloyalty".

On Christmas Eve, he reiterated his call for unity, though his tone was more conciliatory.

He called on the region's leaders to help "Catalonia's society -- diverse and plural as it is -- to recover its serenity, stability and mutual respect, in such a way as to ensure that ideas... do not separate families and friends from each other".

Spain is now "a mature democracy, where any citizen can ... defend, freely and democratically, his opinions and ideas; but not impose his ideas in a standoff with the rights of others", the king said in his fourth Christmas speech since his accession to the throne.

Supporters of Catalan unity with Spain accuse their separatist rivals of creating a gulf pitting the pro- and anti-independence camps.

Throughout the crisis over independence, Spain's worst since democracy was reinstated following the death of dictator Francisco Franco in 1975, the government in Madrid has repeatedly warned of the economic risks posed by a bid for secession.

More than 3,100 firms have moved their legal headquarters out of Catalonia since the referendum. Tourism, a key industry for the Mediterranean region, has also been hit by the crisis.

With their leaders in jail or exile, separatists now face the challenge of forming a government.

In Belgium, Puigdemont called on Prime Minister Mariano Rajoy to hold talks in Brussels or any other European location -- barring Spain where he faces arrest.

Rajoy rejected the call, however, as his government urged Catalonia's leaders to work within the framework of the law and abandon "unilateral decisions".