Japan to deal with North Korean evacuees in case of crisis 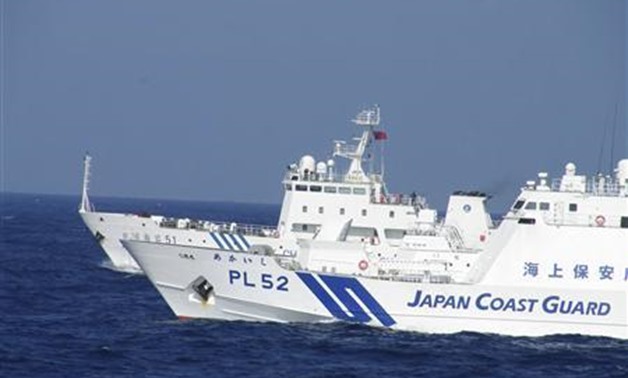 Chinese marine surveillance ship Haijian No. 51 (rear) cruises next to a Japan Coast Guard patrol ship, Akaishi, in the East China Sea near the disputed isles known as Senkaku isles in Japan and Diaoyu islands in China - REUTERS

TOKYO – 16 November 2017: Japan is studying plans to cope with an influx of perhaps tens of thousands of North Korean evacuees if a military or other crisis breaks out on the peninsula, including ways to weed out spies and terrorists, a domestic newspaper said.

The Japan Coast Guard would escort boats fleeing North Korea to designated ports, where police would screen them by checking their identity and possible criminal records and expel those deemed a threat, the Yomiuri newspaper said on Thursday.

It did not say where those people would be sent, however.

Evacuees granted temporary entrance would be transferred to emergency detention centres, probably in southern Japan, after completing quarantine and other procedures.

Officials would then decide whether they were eligible to remain in Japan, the Yomiuri said.

A senior Chinese diplomat was to visit the North from Friday as a special envoy of Chinese President Xi Jinping, just a week after U.S. President Donald Trump met Xi in Beijing and pressed for greater action to rein in Pyongyang.

Junji Ito, an official of the justice ministry's immigration bureau, said the Japanese government was looking at steps to deal with a possible influx of people from North Korea but declined to comment on details.

Outspoken Deputy Prime Minister Taro Aso grabbed headlines in September when he touched on the possibility of shooting armed refugees from North Korea.

"Will police respond and arrest them on charges of illegal immigration?" media quoted him as saying in a speech. "If the Self-Defense Forces (military) are dispatched, will they shoot them down?"

On Thursday, the Japan Coast Guard said it had rescued three North Korean men on a capsized boat a day earlier and was searching for 12 missing crew. The men said they were fishermen, not defectors, and Japan was arranging to send them home, it added.

Japan has strict requirements for recognising asylum seekers and accepted only three refugees in the first half of 2017 despite a record 8,561 fresh applications.

The country took in more than 11,000 Indochinese "boat people" refugees over three decades to 2005 in the aftermath of the Vietnam War, a little-remembered open-door policy.