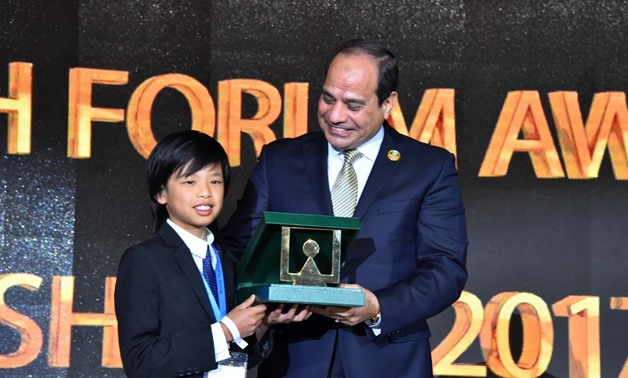 “The presence of the Egyptian President Abdel-Fatah al-Sisi has a major role in the success of the WYF;” one of the international guests at the World Youth Forum (WYF), Imam Mohammed el-Doushi, said to Egypt Today.

The participant, who is from the United Arab Emirates (UAE), noted that most foreigners he met expressed their consensus and positive opinion of the event.

The honored participants included Anuka Primrose; from Sri Lanka, the youngest elected member of the Asia-Pacific Youth Consultative Council of the United Nations. Anuka is the youngest girl to receive the Commonwealth Youth Award for Development Excellence.
The Egyptian President further honored Mohamed Ali; a resident of the United States of America, and one of the most famous designers of visual effects in Hollywood. Ali is one of the few Egyptians who have specialized in this field worldwide. Sisi has also honoured Rachel Sibandi, the founder of the first technology center from Malawi.

In a fatherly gesture, Sisi honored Mohamed al-Husseini; the first Egyptian swimmer with Down Syndrome to cross the English Channel. Mohamed has endured swimming 16 kilometers for 7 hours to cross the Channel between England and France.

WYF kicked off on Saturday in Sharm el-Sheikh, South Sinai under the auspices of President Sisi.

The seven-day gathering witnesses the participation of official youth representatives over 18-years-old, leaders of various youth networks, heads of state, media figures and around 250 young Egyptian expats. It is held under the slogan "We Need to Talk."

Sisi honors Mahmoud Shalaby,a police officer who suffered an accident that led to quadriplegia in 2004 and the world's first person to swim alone for a mile and a half- press photo

President Sisi Abdel honors Wahab Youssri, who passed away while he was organizing the world Youth Forum- press photo