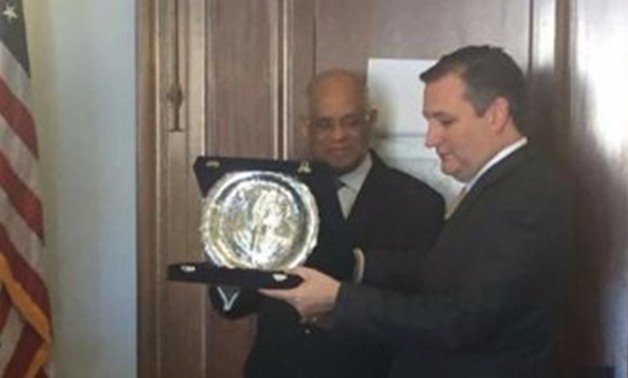 Parliament Speaker Ali Abdel Aal and the Chairman of the Homeland Security Committee at the U.S. House of Representatives Michael McCaul at the headquarters of the White House National Security Council – Press Photo

CAIRO – 2 November 2017: Parliament speaker Ali Abdel Aal affirmed that Egypt does not have any direct or indirect military cooperation with North Korea which has been declared three months ago by former Chief of Staff Mahmoud Hegazy.

That was during his meeting with the chairman of the Homeland Security Committee at the U.S. House of Representatives Michael McCaul and other committee members on Thursday at the headquarters of the White House National Security Council, which is part of the U.S. president's executive office.

Talks included security matters of mutual interest, mainly fighting terrorism, as well as foreign policy issues regarding the Palestinian reconciliation, and the Syrian and Libyan crises. Both sides agreed that the latter must be politically resolved to preserve the concept of the nation state, and combat terrorist groups.

Strong security and military cooperation between Egypt and the United States is a top priority for the U.S. because of Egypt’s efforts in fighting terrorism in the Middle East, U.S. Senator Ted Cruz said on Wednesday.

Cruz welcomed on Wednesday the delegation of parliamentarians led by the Egyptian parliament speaker Ali Abdel Aal during their six-day visit to the United States.

Abdel Aal expressed his gratitude for the efforts exerted by Cruz in fighting terrorism when he introduced a bill to ask the Secretary of State to designate the Muslim Brotherhood as an international terrorist organization.

The Egyptian speaker stressed that it is important to promote cooperation between the United States and Egypt in the fields of security and military to preserve peace and security in the Middle East.