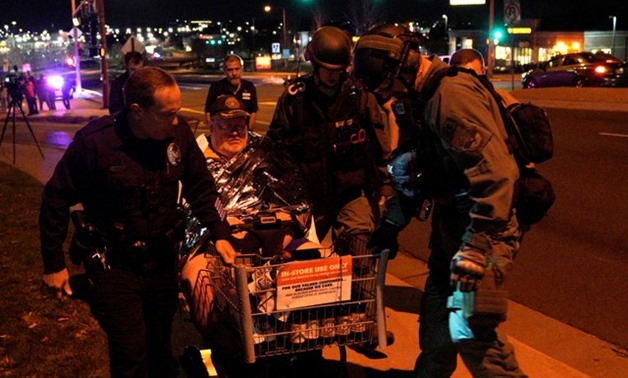 THORNTON, Colo. - 2 November 2017: Police in Colorado on Thursday were searching for a gunman who calmly walked into a Walmart in suburban Denver and opened fire with a handgun, randomly shooting at shoppers and store clerks, killing three people, before he fled.

The suspect "nonchalantly" entered a Walmart in Thornton, Colorado, and opened fire a little after 6 p.m. local time on Wednesday and then walked out, got into a red four-door hatchback and drove away, Thornton Police Department spokesman Victor Aliva told reporters, citing witness accounts.

"What we have determined is that it is random as of right now," Aliva said. "As witnesses stated, the person came in and just shot towards a group."

Two men died at the scene of the shooting. A wounded woman was taken to a hospital where she died, he said.

The shooter is a white man, who was wearing a black jacket, maroon shirt and blue jeans, Aliva said.

There was no indication that the shooting was an act of terrorism as no one has claimed responsibility, he said.

"We can't rule anything out," he said.

A Walmart customer, Aaron Stephens, 44, of Thornton, told Reuters he was inside paying for groceries at a self-checkout stand when he heard gunshots and the sound of ricocheting bullets.

Stephens said he did not see where the shooting had come from and did not see anyone struck by bullets.

Local NBC television affiliate 9NEWS reported that a woman whose son was in the Walmart had told her that he had heard about 30 gunshots and was still inside.

A video posted on Twitter showed the Walmart, which is in a large complex of big-box stores and other retail outlets adjacent to U.S. Interstate 25, apparently empty except for police officers with guns drawn.