Barzani steps down leaving a vacuum of control in Kurdistan 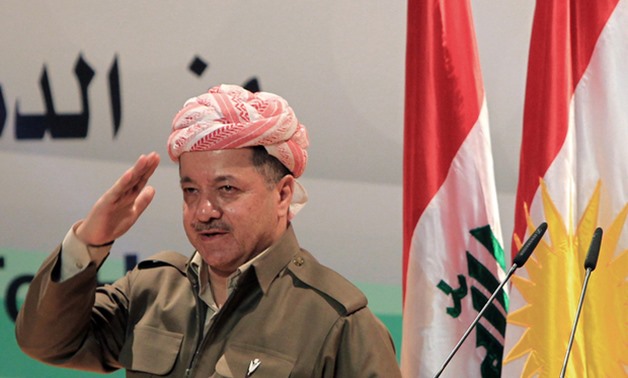 Masoud Barzani, the president of the Kurdistan Regional Government. AFP

CAIRO – 29 October 2017: The Iraqi Kurdistan Parliament sits today in one of the most significant parliamentary sessions in modern Kurdish history. One subject dominates the agenda: the longevity of Kurdish President Masoud Barzani’s tenure.

In previous weeks the world has observed hostile rhetoric develop into direct military conflict between Kurdish Peshmerga, Iraqi Security Forces, and Hashd al-Shaabi militants. The Iraqi Kurdish independence referendum consolidated the hopes and aspirations of the Kurdish nation, in what was perceived to be a direct challenge to the supremacy of Baghdad.

Baghdad’s retaliation was swift and strong. Within weeks of the referendum Iraqi forces and Hashd al-Shaabi militants reclaimed many disputed territories on the fluid and ever-moving border. Losing control of the city of Kirkuk and the resources it commands came as a significant loss for the Kurdish people.

A territory symbolic of Kurdish strength, the resources provide vital economic security and independence while the K-1 military base and airport provide strategic significance.

Previously under the shared administration of both Baghdad and the KRG, the Kurds took full control of the city after Iraqi army forces fled from the Islamic State. However, just weeks after the independence referendum, the territory fell to Iraqi and Iranian-backed forces, facing feeble resistance from the Peshmerga.

Iraqi Kurdistan and the Peshmerga suffered a catastrophic defeat in the face of forces advancing from the south. This has drawn light to many questions surrounding Barzani’s leadership of the KRG. Barzani was the driving force behind the independence referendum, and the outright failure of the Kurdish forces under his leadership and direction to defend the self-proclaimed Kurdish territories was a slap in the face to those who supported Barzani and his fight for independence.

“We all know the attack was coming, so why did they encourage people to fight in Kirkuk when they simply retreated at the last minute? That’s the question. They can take a big step – Barzani and the PUK administration – they need to resign; and leave. That’s what I hope for. I wish they would leave Kurdistan,” a source in Kirkuk told Egypt Today.

Barzani has been President of the Iraqi Kurdish region since 2005. Although his tenure officially ended in 2015, he has remained in the top office as Islamic State advances threatened the stability of the state. Strong leadership and decisive authority was a must, and Barzani has been able to dominate the political atmosphere well over a decade.

During the campaign for independence Barzani declared that he would not stand again for the presidency. True to his words, it was reported that Barzani would not extend his presidential term beyond November 1, and his powers would be transferred by Parliament among the government, Parliament and judiciary.

Few people thought that he would stick to his promise, as many believed that his campaign for independence was as much a move to bolster his popular support as it was to gain independence from Iraq. As Barzani steps down it is likely he will leave behind a vacuum of authority. At an important time In Kurdish history, it is anticipated that many will attempt to fill his boots. These are big boots to fill, as
Iraqi Kurds face a plethora of direct challenges. Iranian influence, independence and economic security will all dominate the political atmosphere.

“I will remain as a Peshmerga,” said Barzani in a letter to Parliament.