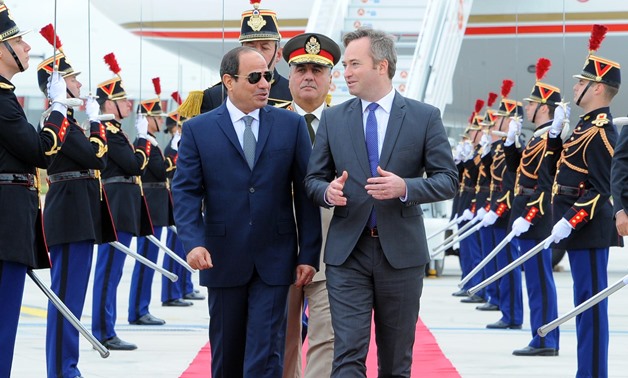 Sisi to France 24: 'No political prisoners in Egypt'

By: Egypt Today staff
CAIRO – 24 October 2017: Within the framework of his third visit to France and his first meeting with French President Emmanuel Macron, President Abdel Fatah al-Sisi was interviewed by France 24 Arabic’s Editor-in-Chief, Michelle al-Keik, to discuss a number of topics concerning recent events.

Terrorism in the Middle East and Europe
Sisi said that Egypt has destroyed some 1,200 vehicles carrying arms, ammunition and militants within the past three years.He also added that terrorism does not only threaten Egypt and the Arab world, it also threatens the Middle East and Europe. Egypt has called for the necessity of collaboration of all nations against terrorism for years. “It is the real threat to humanity, security and stability worldwide,” Sisi added.

Giza clashes
Commenting on Friday’s clashes in Giza in Egypt's Western Desert, where 17 security personnel were killed and 15 militants were injured during a raid on a terrorists' hideout, Sisi said that investigations are still in the first phase.“Infallibly guarding 1,200 kilometer borders in a desert area like the Sahara is not possible.”It is estimated that recent achievements against terrorism in Syria and Iraq will lead terrorist elements to move towards Libya, Egypt and West Africa; collaboration is necessary to prevent those elements from reaching (these parts) and to cut the funds and weapons provided for them, Sisi stressed.

Funding and supporting terrorism
Sisi said that there are nations that support terrorists with money, arms and training, and provide them with moral, media, and political support. These countries have to stop, in order to ensure stability in Egypt and the whole world. “The world has faced terrorism's consequences; there are millions of refugees, as well as killed and displaced civilians in Syria, Iraq and many other nations.”Concerning restoring relations with Qatar, Sisi said: “Our response is clear. Qatar has to meet the 13 demands outlined by the Arab Quartet. Egypt does not interfere in the affairs of other nations, and it is our right to ask other nations not to interfere in our affairs,” Sisi added.

Human rights in Egypt
Asked about human rights in Egypt, Sisi said that Egypt is keen on respecting and protecting citizens. “I am responsible for the security of a hundred million Egyptians.”
Sisi denied the presence of political detainees or political prisons in Egypt. “All legal procedures are considered and fair judgments are rendered to all defendants according to the law.”Asked about his opinion regarding the intentions of some human rights organizations' recent reports on political detention in Egypt, Sisi said: “I do not want to accuse these organizations of anything; however, they should know more about the situation in Egypt because media sources sometimes fail to address such issues in an objective manner.”

Egypt’s role in the Palestinian agreement
Concerning the agreement between the Palestinian authority and Hamas, Sisi said: Egypt is keen on stopping the state of ‘extremism’ prevailing in Gaza before it extends to the next generations. The agreement was critical to allow the authority to manage the affairs of Gaza and the West Bank, and thus open the crossings according to the 2011 agreements, Sisi explained.The agreement will also allow the two-state solution an opportunity, envisaging the two independent states of Palestine and Israel alongside each other, where the citizens of each state become respected and secured by the other state, according to Sisi.Discussing the issue of Rafah crossing, Sisi said that it is being regulated and controlled according to a number of international agreements. The recent agreement would strongly contribute to the return of the movement in the crossing and help end terrorism in Sinai, Sisi added.Sisi said that Egypt’s main goal concerning the agreement is to achieve security, peace and stability. “We think there is an opportunity (to achieve this), and our meeting with the Israeli Prime Minister Benjamin Netanyahu came within the framework of this opportunity,” Sisi stated.
“We support all efforts that lead to peace between the people of the two countries,” Sisi stressed.

Egyptian relations with Iran
Egypt is concerned with Arab national security, which includes Gulf security and stability, and thus we support procedures that assert stability in the Gulf States, stated Sisi.
Concerning ties with Iran, Sisi remarked: “Our relations with Iran have been cut off for nearly forty years.” Egypt’s stability is vital to the region: Qatari FM