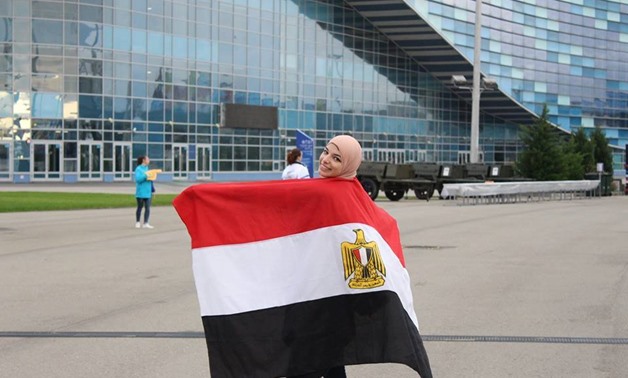 Cairo- 21 October 2017: Russian President Vladimir Putin participated in the closing ceremony of the 19th World Festival of Youth and Students in Sochi on Saturday. He gave a speech to a number of participants representing the delegations attending the festival.

The organizing committee of the World Festival of Youth and Students in Sochi, Russia selected Yara el Braidy, member of the Egyptian delegation, who was recommended by the Egyptian Ministry of Youth and Sports to attend a closed meeting with the Russian president, who will meet a selected number of youth and students attending the festival.

Story Cover OF Yara El Braidy
Yara said she is very proud for representing the Egyptian youth, and this step shows how much President Putin appreciates the role of youth.

Youssef el-Werdany, assistant of the Minister of Youth and Sports, posted on his Facebook page that he is happy with the choice of the festival’s organizing committee, which has rewarded the efforts of the Egyptian delegation during the festival.

The events in the Sochi Olympic Park have brought together about 25,000 young people from 188 countries around the world. A total of 5,000 volunteers from Russia and 76 other countries helped organize the biggest youth event of the year, the Russian News Agency reported.

During the festival, students and young specialists from all continents discussed such issues as global politics and international security, the industry and economy of the future, and environmental issues.

Story Cover OF Yara El Braidy
El Braidy, 23, works as a media and marketing officer for Ashoka Arab World, a non-governmental organization and platform for the world’s leading social entrepreneurs. She graduated from Faculty of Communication and Mass Media at Cairo University.

Story Cover OF Yara El Braidy
Moreover, she has participated in various national and international events tackling the topics of social entrepreneurship, volunteering and media literacy. She attended the Social Innovation Summit 2017 in Cairo and the Global Entrepreneurship Week in El Gouna City 2016, and she received the Arab Humanitarian and Voluntary award in Kuwait in 2016.