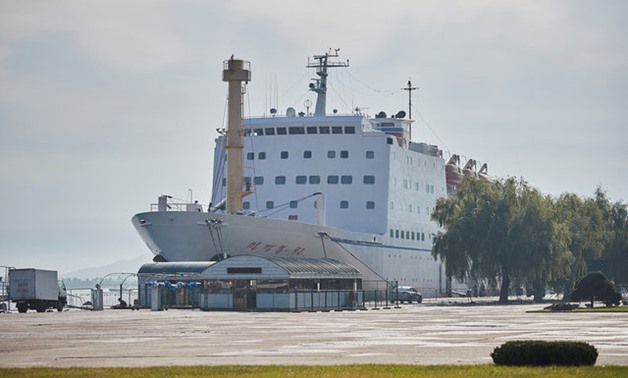 The Mangyongbong 92 ferry is seen docked in central Wonsan - REUTERS

UNITED NATIONS - 11 October 2017: The United Nations Security Council has banned four ships from ports globally for carrying coal from North Korea, including one vessel that also had ammunition, but the United States postponed a bid to blacklist four others pending further investigation.

The vessels are the first to be designated under stepped-up sanctions imposed on North Korea by the 15-member council in August and September over Pyongyang's sixth and largest nuclear test and two long-range ballistic missile launches.

The Security Council North Korea sanctions committee, which operates by consensus, agreed at the request of the United States, to blacklist the ships on Oct. 3 for "transporting prohibited items from the DPRK" (North Korea), according to documents seen by Reuters on Tuesday.

A U.N. diplomat, speaking on condition of anonymity, said the four blacklisted ships and the four vessels still being investigated had been linked to illicit trade in North Korean coal. In November last year, the Security Council capped North Korean coal exports and then in August imposed a complete ban.

The 193 U.N. member states are now required to prohibit port entry to the Comoros-flagged Petrel 8, St. Kitts and Nevis-flagged Hao Fan 6, North Korean-flagged Tong San 2 and Cambodia-flagged Jie Shun. Entry is only allowed in case of emergency or if the vessel is returning to its home port.

The Jie Shun was intercepted by Egypt on Aug. 11, 2016, carrying 30,000 rocket propelled grenades in wooden crates concealed under about 2,300 tonnes of iron ore, according to U.N. sanctions monitors.

It was "the largest interdicted ammunition consignment in the history of sanctions against the Democratic People's Republic of Korea," the independent sanctions monitors told the Security Council in their annual report in February.

The ship had left the North Korean port of Haeju on July 23, 2016, and was interdicted in Egyptian territorial waters south of the Suez Canal, the experts said.

North Korea is under a U.N. arms embargo and the Security Council has banned trade in exports such as coal, textiles, seafood, iron and other minerals to choke funding for Pyongyang's missile and nuclear programs.

In an Oct. 3 note to the Security Council's North Korea sanctions committee, seen by Reuters, the United States said it was withdrawing four ships it had proposed for listing - the South Korean-flagged Xin Shen Hai, the Palau-flagged East Glory 7, the Panama-flagged Kai Xiang and Cheng Hong.

"These four ships require further study with key parties and we will revert to the committee once that process is completed," the U.S. mission to the United Nations wrote.

A ninth ship, the Fiji-flagged Toyo Maru, had been proposed for listing in an annex to the initial U.S. draft of a resolution adopted by the Security Council on Sept. 11. It was not clear if the United States still planned to put the ship forward for designation.