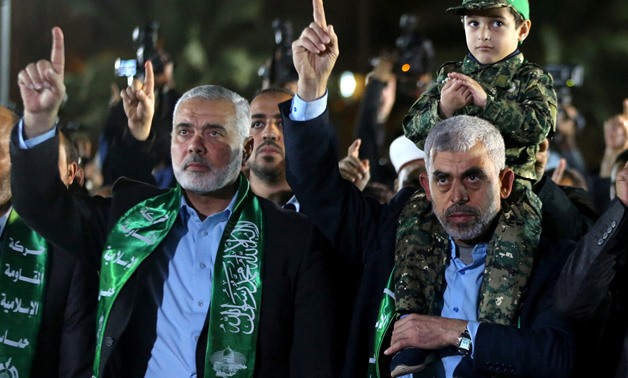 CAIRO – 21 September 2017: Egypt Today showcases a chronology of the conflict history between Fatah and Hamas, Palestine’s two main factions, along with endless efforts of reconciliation.

Ideological differences are at the core of the dispute between Fatah and Hamas. The former is more inclined towards a secularist ideology, while the latter adopts a more Islamic thought.

Fatah believes in resolving the Palestinian issue through negotiations with Israel on ending occupation, while Hamas believes in the notion of an armed struggle.

Following the establishment of the Palestinian Authority in 1994, in implementation of the Oslo Accords (between the Palestine Liberation Organization and Israel), Hamas refused to yield to such an agreement. This, as a result, clashed with Fatah’s idea of implementing the Oslo Accords.

Between 1996 and 2000, the chasm between the two factions deepened when Palestinian security services launched a large-scale campaign to arrest Hamas leaders and activists, accusing the movement of undermining the Palestinian Authority’s role and working against the benefit of all Palestinian people. Hamas, on the other hand, accused Fatah of playing the role of Israel’s security agent.

However, the start of the Second Palestinian Intifada (uprising), in September 2000, prompted a strong dialogue between the two movements after Israel perpetrated countless massacres against the Palestinian people.

Despite some disagreements and clashes between Fatah and Hamas, the two movements initiated dialogues sponsored by former Egyptian President Mohamed Hosni Mubarak, culminating in the "Cairo Agreement” in March 2005.

After Palestinian President Mahmoud Abbas assumed power in January 2005, after Yasser Arafat’s death, he opened an extensive dialogue with Hamas leaders that urged them to participate in the Palestinian legislative elections and declare a truce with Israel.

Hamas agreed to run legislative elections in 2006, only to be surprised by achieving the majority of seats in the Legislative Council.

Hamas’ victory hit home. Fatah and the other factions refused to participate in the new government formed by Hamas, headed by Ismail Hania, on the pretext of "not agreeing on the political program."

During this period, sporadic clashes erupted between supporters of the two movements. Many of other factions failed in bringing an end to the clashes.

Clashes intensified after a speech by Abbas in December 2006, calling for "elections for a new Palestinian Legislative Council as a way out of the current impasse."

The beginning of 2007 witnessed bloody clashes between Al Qassam Brigades (the armed wing of Hamas), Palestinian security services, and fighters from Fatah movement.

In the wake of previous clashes, Saudi King Abdullah bin Abdul Aziz launched an initiative calling on Fatah and Hamas to start a dialogue in Mecca, which proved successful, bearing fruit in the form of the two movements signing the Mecca Accord in February 2007. This entailed forming a government of national unity that is led by Hamas leader Ismail Hania, in which Fatah leader Azzam al-Ahmad was the vice prime minister.

The event was a landmark in contemporary Palestinian history, as Palestinian self-rule became divided into two parts, the first in the West Bank, run by Fatah, and the second in Gaza Strip, run by Hamas.

The Israeli war on Gaza Strip (December 28, 2008 –January 18, 2009), which caused many human tragedies and material damage, broke the iceberg between the two movements, where they accepted the return to dialogue through an Egyptian initiative.
But the two movements also disagreed on the "political program": Fatah still embraced the idea of negotiations with Israel for the establishment of a Palestinian state, while Hamas adhered to the option of an eventual armed resistance but accepted a long-term truce with Israel.

Back to talks after the Second Gaza War

Following the Israeli aggression on Gaza Strip (November 14-21, 2012), a new rapprochement between the two movements took place. Fatah participated in the anniversary of the establishment of Hamas on December 8, 2012. Fatah also allowed Hamas to hold festivals in the West Bank.

On January 9, 2013, Abbas held talks with Khaled Mashaal, head of the Hamas political bureau, in Cairo, and agreed to "implement the Palestinian reconciliation agreement," only for it not to be.

In July 2017, Hamas announced forming an Administrative Committee in Gaza Strip, and the Palestinian authorities accused Hamas then of attempting to form a shadow government and forming an independent state in Gaza.

On September 17, Hamas announced the dissolution of the Administrative Committee in Gaza Strip, inviting the Government of National Reconciliation to assume its duties and hold general elections. The movement affirmed that it would comply with the Social Reconciliation Accord signed with Fatah in 2011.

Hamas and Fatah would start a dialogue and form a national unity government upon the Egyptian initiative to achieve unity among Palestinian powers.

Hania arrived in Cairo on September 10 to meet with a number of Egyptian officials to discuss inter-Palestinian reconciliation and the situation of the Gazan people, according to Hamas’ statement. That was his first visit since he took office last May.

A delegation from Fatah, being led by head of the Fatah parliamentary bloc Azzam al-Ahmed, arrived on Saturday in Cairo to discuss ways to implement Palestinian reconciliation.