How did Rabaa sit-in incite violence? 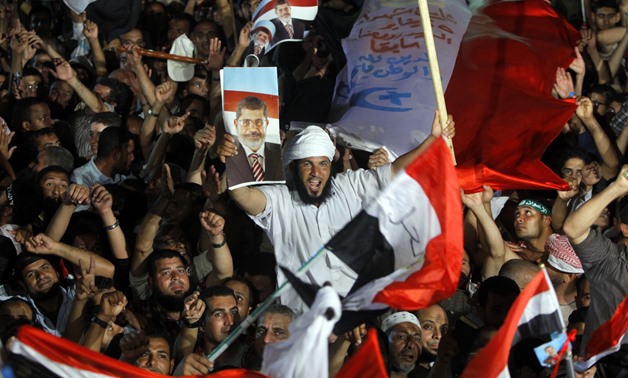 Cairo- 13 August 2017: In July 2013, then-Egyptian Minster of Defense Abdel Fatah al-Sisi called for wide demonstrations backing him and his decisions against any “probable terrorism.”

The speech he gave during the graduation celebrations of the Egyptian Air Defense Academy’s new batch, calling for June 30 demonstrations, was represented as permission from the Egyptian people against anyone who might use terrorism against the state.

Shortly later, and specifically before dispersing the Rabaa Al-Adawiya and Al Nahda sit-ins on August 14, several Muslim Brotherhood leaders were publicly provoking their followers and supporters to use violence against other civilians and threatening that “anyone who would harm former President Mohamed Morsi would be killed.”

Videos, audios and news for their leaders calling for violence went viral on social media, as all of it was considered as proof for “inciting violence”, a crime most of them went to jail for later.

Tarek al-Zumar, one of the well-known Islamic leaders who participated in the sit-ins and demonstrations that was backing former Muslim Brotherhood candidate Mohamed Morsi, said during one of his speeches that the June 30 demonstrations called for by then-Defense Minster Abdel Fatah al-Sisi would be a “knockout” for their group against the others, and that this call doesn’t represent any threat to them. “They are threatening us of what they will do on June 30. Well, we are threatening them from the same day. It will be our knockout,” he said.

Also, Safwat Hegazi, one of the well-known Muslim Brotherhood and Islamic leaders and preachers who participated in and called for the Rabaa Al Adawiya sit-in, threatened not only whoever would participate in the June 30 events, but even any Egyptian opposed to Morsi’s regime. “Whoever thinks of toppling President Mohamed Morsi, we say to him, ‘It’s a matter of life,’” he said during one of his speeches in the sit-in, adding, “Whoever tries to harm Mohamed Morsi will be killed.”

Other videos of demonstrators affiliated with the Muslim Brotherhood were broadcast through some of the media outlets, including statements such as “We will burn and kill you all!” and “We warn you all; get everything back to its normal track, otherwise all of these crowds you are seeing here will blow Egypt up.”

“Everything taking place in Sinai, including all of the acts of violence, will stop in the same second that Abdel Fatah al-Sisi cancels all of his decisions; everything comes back to normal in the country so we get our president back,” Mohamed Beltagy, one of the Muslim Brotherhood leaders and general secretary of the Freedom and Justice Party affiliated with the group, said in an interview during his participation in the Rabaa Al Adawiya sit-in.

Since then, the Egyptian armed forces have been countering several terrorist attacks in North and Central Sinai. Huge numbers of civilians, police, army officers and checkpoints have been targeted; however, hundreds of takfiri elements and terrorists have been announced killed or arrested on a regular basis during the continued security campaigns, according to the army spokesperson.

On December 2013, the Egyptian government labeled the Muslim Brotherhood as a “terrorist group”. Accordingly, anyone who participates in its activities, finances it or backs it will be considered as a terrorist group member by the law.