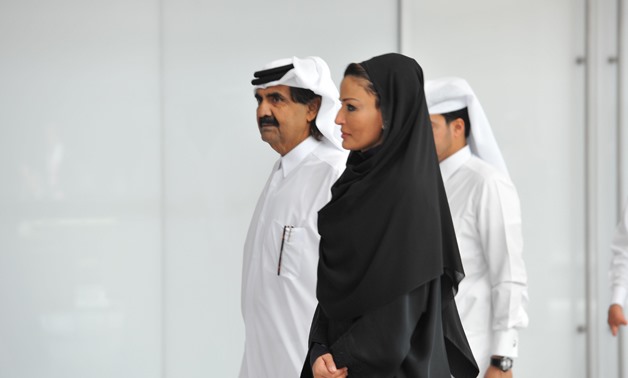 CAIRO – 20 July 2017: In continuation of the Arab sanctions that imposed on Qatar over accusations of “supporting terrorist groups,” Sheikha Mozah bint Nasser Al-Missned, mother of the Emir of Qatar, was removed from the Arab Woman Foundation’s nomination for the 2017 Arab First Woman Award.

The UAE’s news agency WAM reported that the UAE-based foundation decided to write off Mozah’s name from the nomination list over “Doha’s continuation of sheltering terrorist groups and conspiring against the Arab nations’ security.” However, the Foundation’s website has not published the statement.

On 14 June, the Qatari opposition coalition led by Sheikha Nouf bint Ahmed Al-Thani revealed that Cheques for millions of Qatari riyals were transferred from the bank account of Sheikha Moza bint Nasser Al-Missned to elements of the political opposition in Saudi Arabia and Kuwait.

Sheikha Nouf’s official Twitter page published a photograph on Monday of a cheque for 25 million Qatari riyals made out to Abdel Hamid Dashti. Dashti, a former opposition parliamentarian in the Kuwaiti National Assembly, was sentenced to two years imprisonment on charges of illegal fundraising without a license in 2015.

Missned was born on August 8, 1959, in the coastal city of Al Khor in northern Qatar. Her tribe is Al-Missned. She is the daughter of the prominent Qatari opponent Nasser bin Abdullah Al-Missned, who died in 2007.

Her father was an opponent of Sheikh Khalifa bin Hamad bin Abdullah Al-Thani, grandfather of the current emir. As a result, the family lived in exile in Egypt and Kuwait but returned for the Sheikha’s marriage in 1977 to then crown prince Sheikh Hamad. She was 18, studying sociology at Qatar University.

Missned stood behind her husband Hamad as the first instigator to turn on his father to take over the throne in 1995, until the same scene was repeated with her son Tamim to take office in June 2013, and to be the common denominator between them.

From the moment she entered the royal family, she was able to penetrate all parts of the country at all economic, political and social levels, contrary to expectations.

It was under Hamad that Qatar embarked on a massive expansion in its international role. He founded Al Jazeera, the influential Middle East news outlet, and began to reposition Qatar as a key regional player and, through its $100 billion sovereign wealth fund, a massive global investor.

He financed Hamas, Libyan and Syrian extremist groups and the outlawed Muslim Brotherhood in Egypt; he has also maintained relations with the U.S., which views Hamas as a terrorist organization, and Iran, which supports the Assad regime.

Though it’s impossible to say whether Missned has played any direct role in this type of power politics, it is believed that she persuaded her husband to back the Libyan rebels when Muammar Gaddafi threatened to crush the Benghazi uprising.

From that moment on, the actual transformation of Missned began to appear alongside the Emir of Qatar as his only wife. During a Gulf States meeting, she tried to appear as a liberal woman in front of cameras, unlike other wives of Gulf princes.

Saud bin Nasser Al-Thani, a dissent from the Qatari royal family, stated to media outlets in June that Tamim is not the actual ruler of Qatar, but his mother; Sheikh Mozah has an office in the Emiri Diwan, called the Executive Office, which runs Qatar, and Tamim is just a cover, he added.

Crown Prince Jassem, Tamim's brother, should be the actual ruler but he was isolated due to his strong personality. Tamim was appointed to be manipulated by Mozah, Bin Nasser said.

Missned was trying to prove herself as the first woman of Qatar and began to give up the usual Gulf dress gradually, wearing items from Europe's biggest brands. It was said that she drove the Qatar government to buy Harrods, and that she was playing a major role in the purchase of the Valentino fashion house.

In a few months, Missned's relatives began emerging in the roles of power in Qatar. Her brother, Mohammed Nasser Al-Missned, became the head of Qatar's intelligence service, and her second brother Khaled was the security coordinator between the Prince's office and the security services.

Missned’s unlimited ambition was not satisfied with her position during Hamad's years, she planned to remain as Qatar's first lady even after Hamad himself.

Missned plotted a coup against the prince royal of Qatar, Meshaal bin Hamad. Her most important weapon in that battle was to use the religious commitment of Meshaal, portraying him as a religious extremist and claimed that he represented a threat to the ruling family. As a result, Sheikh Hamad issued a decision to appoint his second son, Fahd, as prince royal, while Meshaal became the personal representative of the Emir of Qatar.

Missned was not also satisfied with that decision because she wanted one of her sons to be the prince royal. She convinced Hamad that Fahd was planning a coup against him. Hamad was outraged, and expelled Fahd from the army and placed him under house arrest.

A few weeks later, Jassim, the eldest son of Missned, was declared as crown prince in October 1996, but under mysterious circumstances, Jassim relinquished his post in 2003 to his younger brother Tamim.

Missned was still afraid of her fate after the death of Emir Hamad, especially since he suffered a chronic health crisis because of kidney failure. She managed to convince the sick emir to give up the emirate for his son Tamim, to spend the rest of his life away from the pitfalls of politics and its battles. Thus, Tamim became the Emir of Qatar in 2013, when he was just 23 years old.