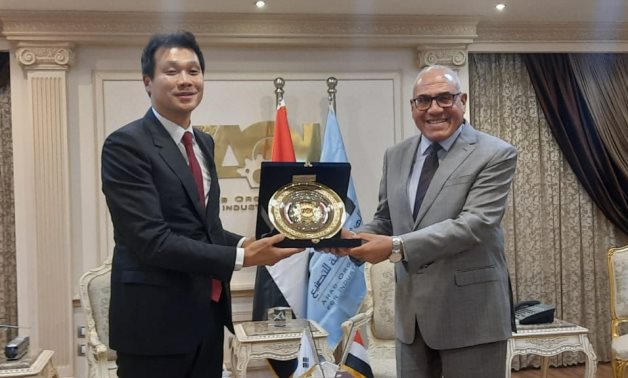 RIYADH - 8 December 2022: Korean Ambassador Hong Jin-wook discussed with Head of the Arab Organization for Industrialization ways of cooperation between Korean companies and the Organization, said the embassy in a statement on Thursday.

The two parties are working on expanding the scope of cooperation to various fields such as military production, environment and water desalination

The  Korean Ambassador, Hong Jin-wook, met with the Head of the Arab Organization for Industrialization, Major General Mokhtar Abdel Latif, on Thursday, December 8, to congratulate him on his assumption of the position of Head of the Organization, and the two sides exchanged their views on ways to enhance cooperation between Korean companies and the Organization.

Ambassador Hong stressed that the bilateral relationship between Korea and Egypt is witnessing remarkable progress in various fields, including transportation, infrastructure, nuclear power plants, military production, cultural exchange and others, since the establishment of the comprehensive cooperative partnership between the two countries in 2016 on the occasion of His Excellency Abdel Fattah El-Sisi's visit to the Republic of Korea. Ambassador Hong expressed his wishes to deepen the cooperative relationship between the Arab Organization for Industrialization, which plays a pivotal role for the Egyptian economy, and Korean companies with global competitiveness in several fields, based on the existing relations between the two countries.

In particular, Ambassador Hong mentioned that the friendship between the two countries is progressing after the visit of the President of the Republic of Korea to Egypt in January and the telephone conversation between the Korean and Egyptian presidents in October of the ongoing year, noting that Korea and Egypt enjoy cooperative relations in the field of military production and national defense more actively than ever especially after the signing of a contract for the export of the K9 howitzer from Korea to Egypt in February and the joint air show over the Pyramids of Giza in August. Ambassador Hong stressed that he hopes to expand cooperation continuously in the next stage through several joint programs, including the joint production of FA-50.

For his part, the Head of the Arab Organization for Industrialization, Major General Abdel Latif, expressed his wishes to strengthen the cooperative relationship with Korean companies in various fields such as electronic products, railways, subways, sea water desalination, and others, adding that Korean companies will also benefit from cooperation with the Organization, as it will facilitate their entry not only to the Egyptian market but also to Europe and Africa.

Ambassador Hong and Major General Abdel Latif agreed that Korean companies with high technological capacity contribute to improving the quality of life of the Egyptian people as well as improving the Egyptian economy through their participation in several national projects such as the Cairo Metro and the establishment of the Dabaa nuclear power plant. The two sides agreed to work continuously to find new areas of cooperation, not only for the benefit of Korean companies and the Arab Organization for Industrialization, but also for the benefit of the people of the two countries.

A press release by the South Korean embassy in Cairo