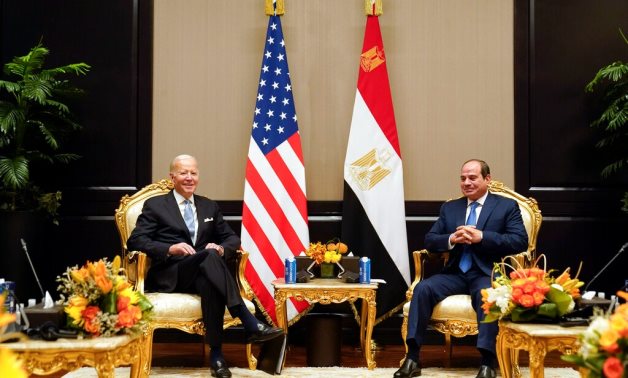 During their meeting President Abdel Fattah al Sisi stresses depth of strategic relations with the United States. He also noted that Egypt launched a "comprehensive strategy" to address human rights issues along with another initiative for national dialogue.
Sisi said that the Egyptian-American relations are strong and extends for more than four decades.
President Sisi stressed during meeting with Biden that Egypt has a presidential pardon committee, to consider 'whoever deserve to be pardoned'. The U.S. President Joe Biden thanked Egypt for playing the mediating role in Gaza developments and hoped that relations with Egypt will be stronger by the end of his visit.
Biden also thanked Egypt for speaking firmly regarding the Russian-Ukrainian war and playing such a vital rule in this regard. “We're living in a decisive decade – one in which we have an opportunity to prove ourselves and advance the global climate fight. Let this be a moment where we answer history’s call. Together,” Biden said.

This comes a day after Egypt’s President Abdel Fattah El Sisi received in Sharm El Sheikh on Thursday Speaker of the US House of Representatives Nancy Pelosi and her accompanying delegation on sidelines of COP27.