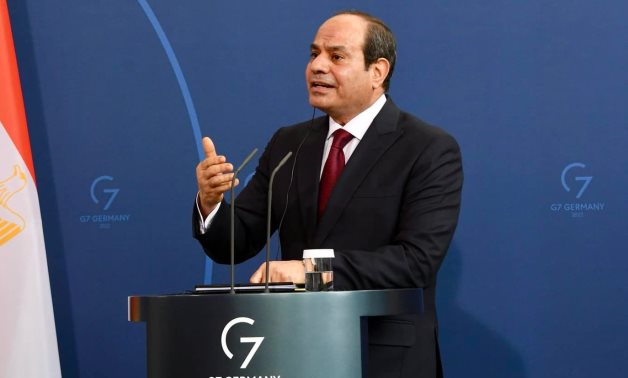 CAIRO - 9 November 2022: President Abdel Fattah El Sisi underlined the crucial role played by Tanzania as one of the active countries in Africa.

Egypt is keen on promoting ties with Tanzania at all levels, especially in its investments in the vital sectors, topped by the construction of Tanzanian Julius Nyerere Dam to generate hydroelectric power, added President Sisi during his meeting Wednesday with Tanzanian President Samia Hassan on the sidelines of the UN Climate Change Conference (UNCCC) COP27.

President Sisi also offered condolences to Tanzania over the victims of its air disaster after a plane crashed into Lake Victoria while trying to land in Bukoba airport in the northwest part of the country, added the spokesman.

President Sisi prayed to Allah to bestow patience on the families' victims and mercy on the victims, said the spokesman.

For her part, the Tanzanian president thanked President Sisi for his sincere brotherly feelings toward the victims of the plane crash.

She also hailed as deeply-rooted the relations between Egypt and Tanzania in the various spheres, affirming her keenness on further promoting ties with Egypt.

In this regard, the Tanzanian president said there are broad prospects for developing cooperation between the two countries in numerous fields, especially at the economic level.

The Tanzanian president also extended thanks to Egypt over its distinguished contribution in development efforts, especially in the construction of Tanzanian Julius Nyerere Dam.

Talks took up ways of boosting bilateral, as well as discussing the latest developments in the African Continent, said the spokesman.

The meeting also tackled efforts to combat terrorism, which is considered one of the major challenges facing Africa, added the spokesman.

The two sides agreed on the importance of promoting integration between the African countries, especially in the economic and trade ties.

The Nile water file was raised during the talks, said the spokesman, adding that an agreement was reached to support the development path of the Nile Basin countries.