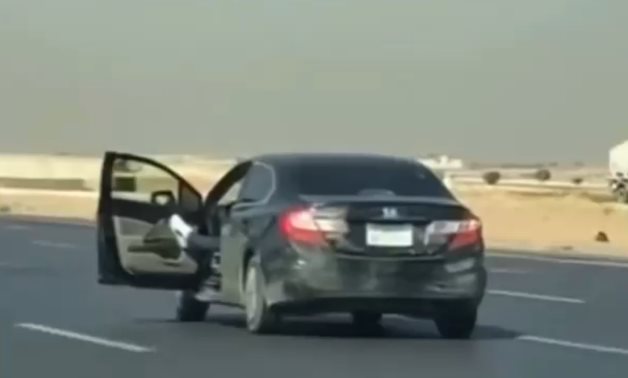 CAIRO – 26 September 2022: The Egyptian Public Prosecution ordered on Sunday referring a man to trial for driving under influence on Cairo-Suez Road and possessing narcotics for personal use.

In a statement, the prosecution said it established evidence against the defendant through footage on social media that showed him driving recklessly in a way that endangered people’s lives.

The chemical laboratory also proved that the defendant’s belongings contained narcotics, the prosecution said, adding that the man also tested positive for drugs.

The prosecution also ordered addressing the violent committed against the defendant by some of the civilians who stopped him on the road, which led to his injury. This is in addition to the truck that bumped the defendant’s car from the rear.

On Saturday, a man who was seen driving his vehicle with an open door and leg out, blocking cars from passing on Cairo-Suez highway was arrested a short time after his car was bumped by a truck from the rear.

Security forces managed to arrest the driver who “obstructed traffic and endangered his and other people’s safety,” the Ministry of Interior said in a statement.

Signs have shown that the driver abused alcohol, the ministry said, adding that the authorities seized cigarette rolling papers, a tool for abusing the “ice” drug, and an unidentified medicine.

The man was seen driving for a long time while opening the door and steering to the left and right to block cars from passing him.

The man continued driving that way even after his car was hit by a truck from the rear. The truck driver tried to stop him but the man managed to drive away and going past a tollbooth without stopping.

Civilians were seen beating the driver after they managed to force him to pull over. Police then arrested the man, bringing the curtain down on one of the rare incidents in Egypt, which was almost fully filmed.

A man who was seen driving his vehicle with an open door and leg out, blocking cars from passing on Cairo - Suez highway was arrested a short time after his car was bumped by a truck from the rear on Saturday.#Egypt | #مصر #السويس #مطاردة_السويس pic.twitter.com/R7RFjyK9OY