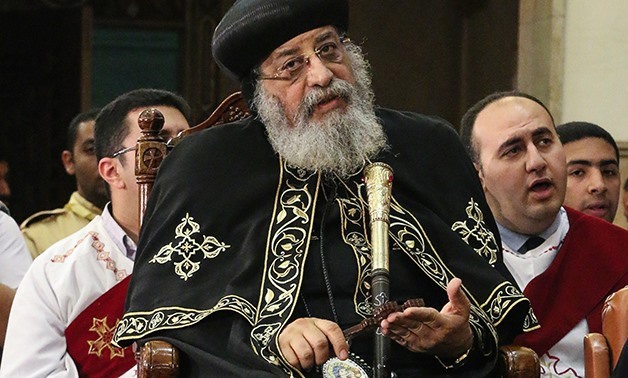 FILE - Pope Tawadros II of Alexandria and Patriarch of the See of St. Mark

CAIRO – 21 August 2022: Pope Tawadros II of Alexandria and Patriarch of the See of St. Mark inaugurated Saturday evening the third edition of Logos Coptic Youth Forum having as theme - this year - "Back to Roots."

The forum is held in Wadi Al Natroon, and is attended by 200 young Coptic expats affiliated to a total of 35 dioceses.

Pope Tawadros II inaugurated in July two Coptic churches in Austria. Further, the Pope launched in August 2021 the Cathedral of St. Macarius at his monastery in Wadi El-Natrun.

On July 26, 2021, Egypt's cabinet headed by Prime Minister Mostafa Madbouli announced legalizing the status of 76 churches and service buildings, bringing the total number of churches and affiliated buildings that have so far been licensed by the committee to 1,958.

Abbas added that the authority also approved establishing seven other churches in new cities in 2018, besides the Church of Nativity, the Middle East’s biggest church that was inaugurated in Egypt’s New Administrative Capital.