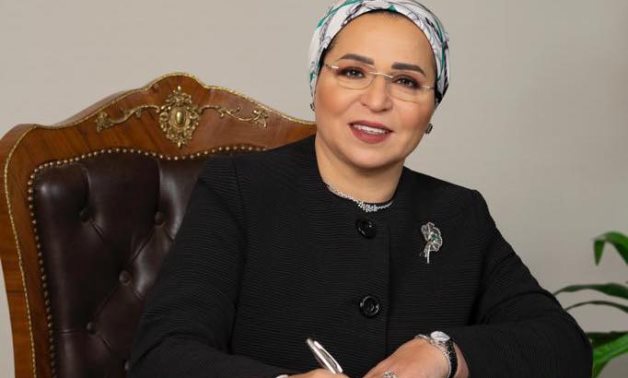 CAIRO – 23 July 2022: Egyptian First Lady Entissar Amer marked the 70th anniversary of the 23 July 1952 Revolution, saying that people and army presented the “ideal model of determination” on that day.

“Today marks the glorious 23rd of July Revolution from which we draw a lesson for our present,” Amer said on Facebook on Saturday.

She hailed the revolution as one of the most important glory days in the contemporary history of Egypt.

“Our people and their armed forces presented the ideal model of determination and will so that this country could live in freedom, pride and independence,” she added.

President Abdel Fattah El-Sisi congratulated on Saturday people on the anniversary of the 23 July 1952 Revolution, saying the revolution continues to inspire us with spirit of determination to achieve people’s aspirations.

“I congratulate the Egyptian people on the occasion of the seventieth anniversary of the glorious July 23 Revolution, which will remain in our minds,” Sisi said on Twitter on Saturday.

“We are proud of it (the revolution) and its lofty goals inspire us with the spirit of determination, insistence, and will to achieve the aspirations and hopes of the people of Egypt for a bright future for future generations,” the president added.

In a televised speech today, Sisi said that he is confident of people’s firm determination in marching toward the “new republic” as he marked on Saturday the 23 July 1952 Revolution.

“I am sure of the strength of our determination together to continue in steady and confident steps on the path we all chose in order to launch into the new republic,” Sisi said in a televised speech.

He added that the new republic is a republic of development, construction, progress, and a change in reality, which establishes a comprehensive intellectual, social and humanitarian system.

He added that the new republic would prepare a developed human and society that has high human values.

​“In spite of the increasing adverse circumstances caused as a result of many unfavorable international events and developments, we are able with the willing of God and the determination of the people of this great country to overcome them,” Sisi said.

He called on people to utilize the celebration of the July revolution as a renewal of momentum to work on advancing the nation and achieving the aspirations of people in a bright, safe, secure, and developed future and present.

“Today marks the 70th anniversary of the glorious July 23 Revolution, which represented the culmination of a long struggle led by the Egyptian people in defense of their right to a homeland with a head held high,” Sisi said.

He added that the revolution had contributions to the entire region regarding global decolonization movements, noting that it consolidated the right of peoples to self-determination as the international map changed and the banners of freedom and independence rose above most Arab and African countries.

The president affirmed that the history of the Egyptian armed forces will remain full of national achievements, including the glorious July Revolution that the armed forces carried its flag.

The revolution “returned to the homeland its pride and to the citizen his dignity” and represented “a model for the relationship between the people and their army, which has been long characterized over the decades by cohesion and deep mutual trust,” Sisi said.

He hailed the relation between people and army in Egypt as “unique,” affirming that the armed forces are aware of their mission and perform it ideally.

In this regard, Sisi paid tribute to leaders of the revolution, on top of which was Former Presidents Mohamed Naguib, Gamal Abdel Nasser, and Anwar El-Sadat.

Sisi said Egyptian people is determined to advance the nation and improve its reality despite the consecutive challenges, affirming that there is no way to overcome these challenges except hard and continued work.

He affirmed that resilience in the face of the challenges that have been hitting the world over the past three years would not have been possible except with the state’s efforts in the economic reform field.