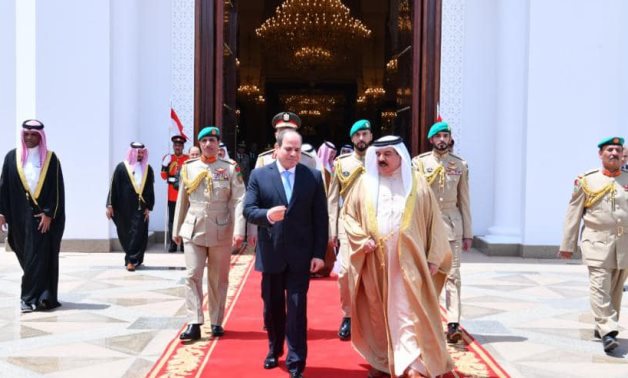 The two countries underlined the importance of stepping up efforts to reach a just and comprehensive settlement to the Palestinian-Israeli conflict and create real prospects to guarantee resumption of serious and effective negotiations that will bring about peace in accordance with the principle of the two-state solution, international legitimacy resolutions and the Arab Peace Initiative to ensure the establishment of an independent Palestinian state within the June 1967 borders.

This came in a joint statement issued on the occasion of President Abdel Fattah El Sisi's visit to Bahrain.

As part of brotherly relations and distinguished ties binding the leaderships of the two countries and the two peoples, an official session of talks was held between President Sisi and King Hamad bin Isa al Khalifa to expound ways of developing bilateral relations in all domains and increase economic cooperation to better serve the interests of the two peoples, the statement said.

The Bahraini king reiterated the kingdom's full support of Egypt's water security as an integral part of Arab water security, urging Ethiopia to give up its unilateral policy and abide by relevant international law rules as regards filling and operating the Grand Ethiopian Renaissance Dam.

He underlined the importance of holding negotiations with Egypt and Sudan to reach a binding agreement in this regard in implementation of the presidential statement issued by the Security Council in September 2021 that called for protecting interests of the River Nile's downstream nations and enhancing cooperation among Egypt, Sudan and Ethiopia.

The Bahraini king expressed full support of all measures taken by Egypt to protect national security.

After that, the Bahraini king received Sisi at Al-Sakhir Palace in Manama, where an official reception ceremony was held, Presidential Spokesman Bassam Rady said.

The presidency's press statement indicated that the Sultan valued the distinguished role played by Egypt in the reinforcement of joint Arab work in the face of crises and challenges, which is essential for stability in the Middle East and enhancement of the developmental, economic, and social conditions.