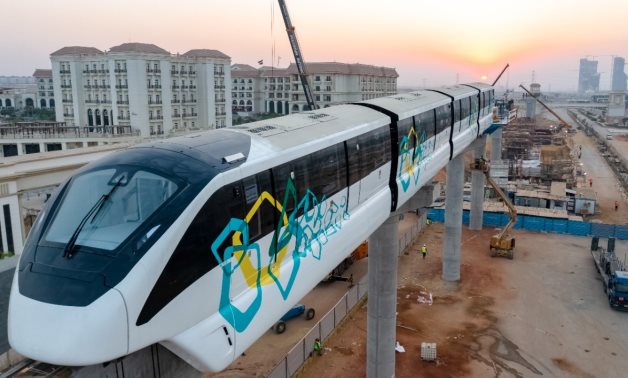 CAIRO – 6 June 2022: Six new trains will arrive Monday to be installed on the Monorail line in the New Administrative Capital, while the seventh train is expected to arrive on Wednesday.

This is part of a total of 40 trains to be installed to the East Nile Monorail project, while the manufacturing of the rest of the fleet of mobile units for the project is underway.

The rest of the trains of the fleet will arrive successively according to the stipulated schedule.

Work in full swing to complete the implementation of the project according to the schedule, as this project is considered one of the mass transportation that will serve the new republic, whose foundations were established by President Abdel Fattah El-Sisi.

It is also planned that the project will be integrated with the third metro line at the stadium station in Nasr City and with the electric train at the City of Arts and Culture station in the Administrative Capital.

The monorail project is being implemented in Egypt for the first time and will represent a great cultural shift in mass transportation, for being fast, modern, safe and environmentally friendly, saving fuel consumption, reducing environmental pollution rates, reducing traffic jams on main axes and streets, and attracting passengers.