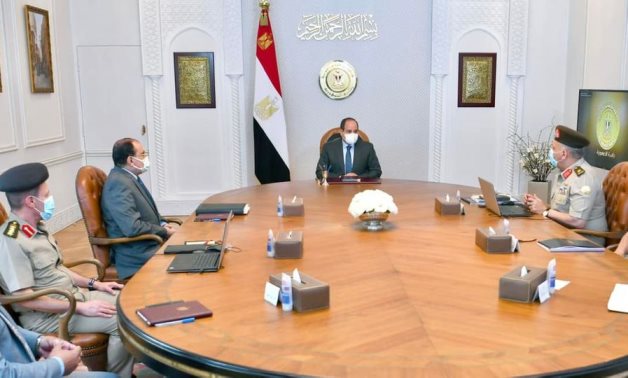 During a meeting with officials on Saturday, Sisi called for establishing the axis, which is set to run until Kornish El-Nile in Maadi, to intersect with other new transverse axes that extend until Eastern Cairo and New Cairo.

This is in addition to Brigadier General Abdel Aziz Al-Faki, Assistant to the Head of the Engineering Authority for Roads Designs, and Tarek Al-Khudairi, Director of Ibdaa Factory for Marble and Artworks.

The meeting followed up the executive position of the engineering authority's projects at the level of the republic, the presidency said.

The meeting reviewed the executive position regarding road sector projects and axes at the level of the Republic, especially those related to Greater Cairo, the Presidency said.

The president ordered raising the efficiency and expanding the old axis leading to Mukattam from Salah Salem Road to become five lanes in each direction. This seeks to help to connect the Mukattam plateau with the various neighborhoods of Cairo smoothly and allow easy movement of citizens.

Efforts to raise the efficiency of roads in South Sinai Governorate, especially from Nuweiba to Taba, were also reviewed. This is in addition to the executive position for the development of the Upper Egypt road network, especially with regard to the Maragha axis.

The president directed to enhance the progress of work in these important new axes on the Nile in order to facilitate movement and support the new urban communities.

The president also inspected the efforts to exploit and develop the area of ​​the monorail station on Youssef Abbas Street in Nasr City, in addition to developing the Shams Club area and the surrounding lands.

This is in addition to exploiting the empty lands located on the sides of the axes and roads in order to implement alternative housing units.

The meeting also dealt with the progress of work on a number of national projects at the level of the Republic, especially the city of Galala, as well as efforts to develop Saint Catherine Airport to keep pace with the comprehensive development of the city within the framework of the implementation of the huge spiritual and tourism " Greatest Transfiguration” project.

The meeting also witnessed a review of the executive position of the construction works underway in a number of facilities in the New Administrative Capital, especially the final touches for the Mosque of Egypt.