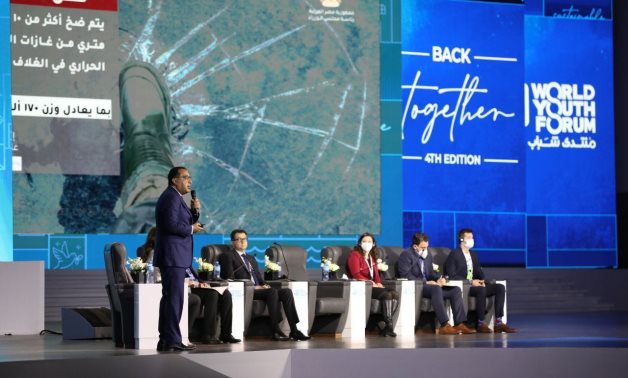 CAIRO – 11 January 2022: The activities of the second day of the fourth edition of the World Youth Forum (WYF) kicked off Tuesday morning, in the presence of President Abdel Fattah El-Sisi, President of the Republic, with the main session entitled "The Road from Glasgow to Sharm El-Sheikh to Facing Climate Change.”

A number of speakers attended the session, headed by Egyptian Prime Minister Mostafa Madbouly, Ambassador Mohamed Nasr, Director of the Environment and Sustainable Development Department at the Ministry of Foreign Affairs and advisor to the African Group of Commissioners, Cassie Flynn, Strategic Adviser on Climate Change at the Executive Office of the United Nations Development Program (UNDP), and Akil Hajjaj, founder of C12 Environmental and Development Consulting in Africa, Karim Tarraf, Founder of Hua Dua, and Marco Schlitz, Consultant, Open Earth Foundation.

On the forum's new interactive platform was John Kerry, US climate envoy, John Martin, UK special climate envoy, Inger Andersen, Executive Director of the United Nations Environment Program, and Bill Wire, writer, producer and climate reporter at CNN Yolanda Wright, Global Director of Child, Climate and Urban Poverty at Save the Children, and Fabrizio Carboni, Regional Director for the Middle East, Near and Middle East at the International Committee of the Red Cross.

The Prime Minister said that during the ten seconds in which he is currently speaking in the session, more than 10,000 metric tons of greenhouse gases were pumped into the atmosphere, and this is equivalent to the weight of 170,000 people, as well as sea level rise resulting from too many emissions of carbon dioxide, which led to an increase in the average temperature of the planet, in addition to various climatic phenomena.

He added that in the year 2020-2021 there were 10 major global disasters that led to losses of more than 70 billion dollars, stressing that we are at the center of a problem that threatens all humankind.

Madbouly pointed out that other issues affect climate issues, such as the issues of adaptation and financing, and he stressed the importance of having a follow-up and evaluation mechanism, and pointed out that the world witnessed losses of $3.6 trillion during the past years due to climate changes, continuing by saying, "The annual figure of dealing with climate change will reach $500 billion annually.

The Prime Minister continued, noting that the year 2021 witnessed global disasters, which caused losses worth 170 billion dollars, continuing: The rise in temperatures in the past period caused an increase in the number of deaths to reach 300,000 people annually, and the percentage increases during the coming period to reach one million individuals.

Dr. Mostafa Madbouly, Prime Minister, stressed that climate change has become a ruling issue by all standards, and that the world must confront it with all firmness and speed so that it can keep pace with the challenges imposed on us by these changes during the coming period.

As for the steps that Egypt is taking in this regard, Egypt is one of the countries that are most vulnerable to climate change, although its responsibility for this change is very, very limited, but at the same time, the world says that Egypt has enormous potential in renewable energy, and it will be one of the fastest countries and the top 5 renewable energy producing countries in the Middle East and Africa.

He also stressed the importance of Egypt’s project to develop water lakes, which had been neglected for hundreds of years, but Egypt took bold steps, including the Manzala Lake project, that cost so far 2 billion dollars, as well as the Benban solar project, which is one of the best projects around the world, as well as another project to connect natural gas to all homes at the level of the republic, and replace traditional energy.

The WYF was cancelled last year due to the pandemic.

The 2021’s WYF agenda includes number of vital topics, which reflect the features of the new reality after Coronavirus pandemic, that affected the lives of millions all over the world. Participants at the 4th edition of WYF have the choice to participate either physically or remotely via the virtual system due to COVID-19.

Several presidents and key figures have delivered speeches in person or virtually during the first day of the forum on Monday, which has been attended by Egyptian President Abdel Fatah al- Sisi.

“Egypt aims, through COP 27, to focus on the African continent, so that African states present their requests to keep pace with changes at the local level,” Egyptian Prime Minister said, adding “we encourage young people to develop innovative solutions and encourage their implementation.”