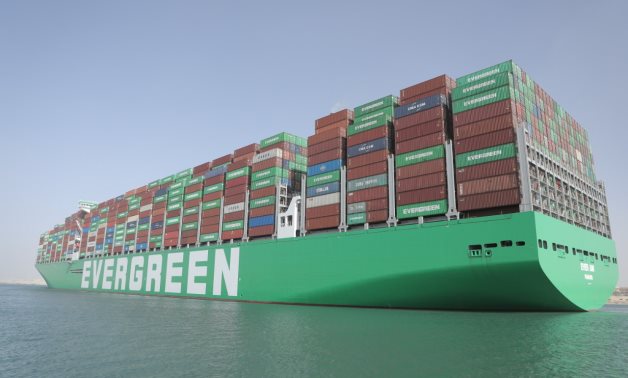 The former is heading from Malaysia to the Netherlands entering the Canal from the Red Sea, while the latter arrived from the Mediterranean on its way to Oman from Cyprus. EVER AIM used the new Canal dug parallel to the original one transporting cargo weighing 241,000 tons distributed among 21,656 containers. The vessel is the third of 12 A-class series container ships built for Evergreen.

The statement issued by the Suez Canal authority indicates that EVER AIM is a replica of the world’s largest container ship dubbed EVER ACE. It has a length of 400 meters, a width of 61.5 meters, a draft of 16.4 meters, and a capacity of 23,992 containers.

As for the dimensions of COSTA FIRENZE, it has a length of 323 meters, a width of 36 meters, and a draft of 8.5 meters. While navigating the Suez Canal, it was carrying 1,602 passengers.

Three of the most senior pilots were assigned by Admiral Rabie to direct both ships through the Canal. In addition, tugboats were deployed to help them through, and instant follow-up was carried out by control points allocated along the waterway. The chairman of Suez Canal asserted the waterway’s ability to receive the world’s most modern and largest vessels, including giant container ships, having deep drafts now and in the future.

Admiral Rabie further showcased that the rise in numbers of cruise ships navigating the Canal over the past period is an indicator that the international tourism sector is recovering. In that context, he pointed out the authority’s commitment to giving cruise ships that stop at one of the Egyptian ports for 72 hours a 50-percent discount on crossing fees.