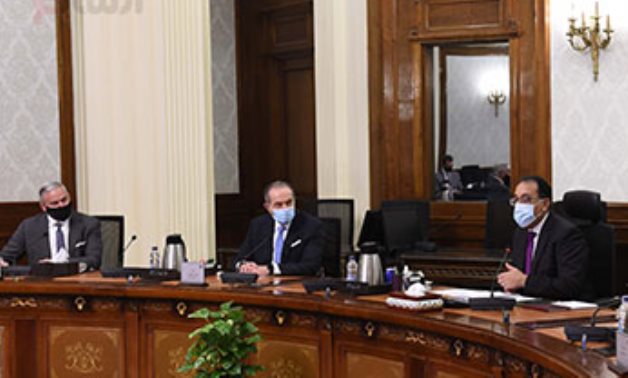 Prime Minister Mostafa Madbouli in meeting with the CEOs of General Motors and Mansour Group at the Cabinet's headquarters on November 30, 2021.

The prime minister pointed out that the government is preparing an integrated strategy to localize automotive and auto feeding industries as well as transferring modern technology to local components.

In a similar context, Madbouli tanked both corporates for taking part in the initiative of replacing obsolete vehicles encouraging them to raise their production, supplying more vehicles within the initiative to meet increasing demand. He also expressed understanding of the crisis endured by automotive companies due to the shortage in semiconductors, stressing the importance of setting a proactive plan to increase production once that calamity is over.

General Motors and Mansour Group are about to sign an MoU to support emerging companies in the electric automotive sector backing Egyptian endeavors to become a regional hub for automotive and auto feeding industries.

General Motors' CEO stated that the company is willing to invest around $35 million in Egypt by 2025. He added that it will also begin selecting the features of the electric car to be offered in the Egyptian market.

On his side, the prime minister said he looks forward to cooperation with General Motors and Mansour Group in the field of localizing electric automotive industries calling on them to set a clear framework to operate within in the coming period.