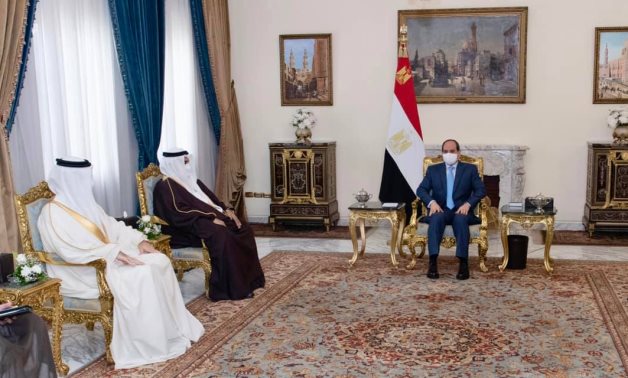 Sisi received the king’s advisor on Wednesday in Cairo in the presence of Egypt’s Foreign Minister Sameh Shoukry and Bahrain’s Ambassador to Cairo Hisham bin Muhammad Al-Jowder, a statement by the Egyptian Presidency read.

The meeting addressed means of boosting bilateral relations between Egypt and Bahrain at all level, especially concerning preparations to host the joint Egyptian-Bahraini committee during the first quarter of 2022.

Sheikh Khalid bin Ahmed conveyed the greetings of King Hamad bin Isa to Sisi and affirmed the king’s keenness to boost the brotherly firm relations with Egypt in a way that enhances the security and stability of the region.

The Egyptian-Bahraini Committee is set to convene its 11th session in Cairo during the second half of January, Director at the Egyptian foreign ministry for GCC and Yemen's Affairs Minister Plenipotentiary Mohamed Diaa said on Tuesday.