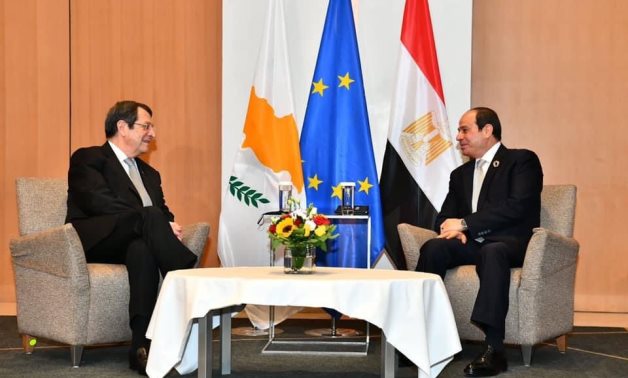 President Abdel Fatah al-Sisi and his Cypriot counterpart Nicos Anastasiades on the sidelines of the 9th Tripartite Summit in Athens on October 19, 2021. Press Photo

CAIRO – 19 October 2021: President Abdel Fatah al-Sisi had met Tuesday with his Cypriot counterpart Nicos Anastasiades before the ninth Tripartite Summit with the Greek prime minister kicked off in Athens.

The Egyptian president said he looks forward to the intensification of consultation with Cyprus over challenges Eastern the Mediterranean among other regional issues.

He also commended bilateral relations, which have been growing closer since the launching of the Tripartite Cooperation Mechanism in 2014.

In September, the Cypriot president visited Egypt taking part in the Supreme Egyptian-Cypriot Government Committee. President Sisi stated in a press conference following the convention that over the past few years, political, economic, and military ties have developed in a model to be followed in the region to achieve integration.

The Supreme Committee will remain to be an important venue for regular consultations on regional issues, Sisi added, while Anastasiades said regular correspondence between the two states’ ministers of energy, agriculture, education, and maritime transport helped develop ideas and open horizons of cooperation.

Based on agreement on renewable energy, the two presidents agreed on exchange of expertise on green hydrogen and full usage of solar energy and thermal energy, Anastasiades added.

In trade, business forums will be held regularly especially in the fields of drugs and fisheries, and in education, a memorandum of understanding on higher education and scientific research will be signed.

Anastasiades emphasized that his vision on Libya is identical to Sisi’s, highlighting the elections should be held in Libya and that foreign forces should be removed from the country. He further praised Egypt’s role in ensuring stability in the region and its mediation between Israel and Palestine.

ٍSisi called for international efforts to support Gaza after the latest Israeli aggression and bringing the Palestinians and the Israelis back to the negotation table leading to a Palestinian state.

As Anastasiades updated Sisi with the latest developments of his country's issues with Turkey, Sisi told the Cyrpiot president of Egypt's efforts to arrive at a fair solution for the Grand Ethiopian Renaissance Dam and to resume negotiations leading to a legally binding agreement on the filling and operation of the structure. He said the international community has a serious role to play in the issue to maintain the stability of that part of Africa.